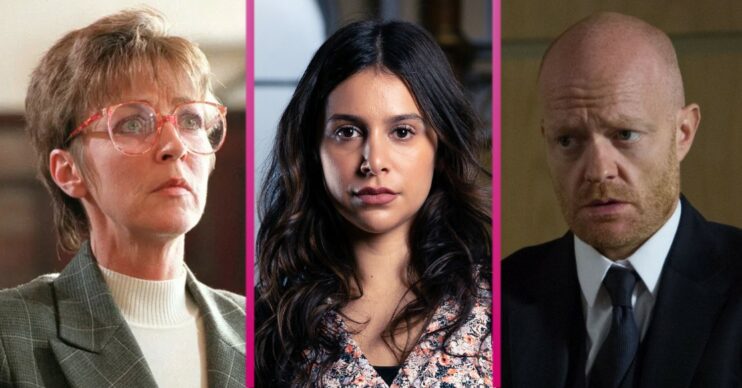 Most explosive soap trials from Coronation Street to EastEnders

The biggest drama happens in the court room

Coronation Street and EastEnders know how to pull off a dramatic court trial.

With Meena Jutla finally facing trial for her many murders in Emmerdale next week, we take a look at some of the most explosive soap trials ever.

Never has a nation been so determined that a soap character should be found guilty – and so terrified that he wouldn’t be.

Nathan Curtis is a soap villain for the modern day.

Manipulating Bethany Platt into becoming his slave, grooming her to sleep with men for money and then trying to traffic her out of the country – it was a harrowing ordeal to watch.

So when he finally got his comeuppance and he was found guilty – it was euphoric.

When Max Branning was arrested for murdering Lucy Beale, EastEnders viewers knew he didn’t do it.

But that didn’t stop Ian, Jane and Phil Mitchell coming together to frame him for it to protect the real killer Bobby.

So when the jury found him guilty it was a huge shock.

But then with Stacey Slater helpfully creating a distraction, Max escaped the most lax court security on earth and fled for his revenge.

It was one of the most explosive moments in soap history.

When viewers know a character is a cold-blooded killer, it’s hard to root for them.

But Tracy was the exception when she killed evil Charlie Stubbs.

Sadly her manipulations came to nothing during the trial with her fake witness David Platt failing to impress the jury.

The night before her trial was when the real drama happened with Tracy finally confessing the truth to her mum Deirdre.

It backfired and Deirdre failed to help Tracy – almost ensuring the guilty verdict herself.

Poor Barry from EastEnders never had a chance at justice – but Michael Moon did.

And standing trial for his murder, Janine’s trial had more twists than any other.

First she framed Alice, then was exposed, then drafted in Kat to sell her lie, then Alice self-harmed and Janine confessed.

And then after all that she was found not guilty. Oh the drama.

It is the most iconic soap trial in history – of all the soaps and not just Coronation Street.

Deirdre sobbing that she didn’t do it, and immediately the nation’s press assembling to ensure she would be freed from prison.

The Free the Weatherfield One campaign even attracted the support of then Prime Minister Tony Blair – it was HUGE.

Read more: Coronation Street star Jude Riordan reveals his brother has joined him on the soap

It took the combined efforts of Ken Barlow and Mike Baldwin to expose the truth and free her for good.

But no-one will ever forget her trial and the injustice it caused.