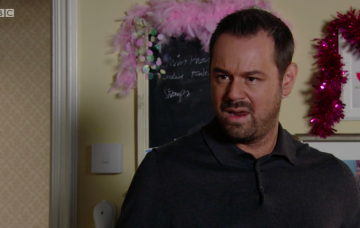 He's just returned from a stint in jail...

EastEnders fans had their Christmas come early this week when favourite Mick Carter returned from jail.

Even better, the pub landlord has sworn revenge on his enemy Stuart Highway – issuing a chilling warning during last night’s episode (Tuesday 18 December).

We sense the mother of all showdowns coming up over Christmas…

However, BBC viewers were transfixed by something else entirely… Mick Carter’s changed appearance.

For a man who had supposedly been in jail for three months, he looked fantastically well and healthy!

Some even said, glowing!

Who needs fancy, expensive spa breaks when a spell in jail leaves you looking as fresh as Mick?

On Monday, Mick was freed from prison when Stuart forced Dylan Box to confess to shooting Stuart, even thought we all know the bald baddie shot himself.

During Tuesday’s visit to Walford, Mick received an emotional homecoming – but was disgusted to discover that Stuart was in Albert Square and living with Dot Cotton.

After a ‘conversation’ seething with animosity, fans were begging Mick to sort Stuart out once and for all, with one tweeting: “I can’t wait for Mick to kick Stuart’s ass.”

But many more noticed that Mick looked incredibly well after three months in prison – and very tanned indeed for a man who has barely seen daylight!

One joked: “Watching EastEnders and if three months of being in prison gives you a tan like Mick’s, lock me right up.”

Has Mick come back with a tan or what? Who knew they had sunbeds in prison 🤷🏼‍♀️ #eastenders

Watching EastEnders and if three months of being in prison gives you a tan like Mick’s, lock me right up.

Did Mick Carter go to an open prison in Spain?? Look at the tan on the geezer! 😂😂 #Eastenders @MrDDyer

Mick got a lovely tan in prison I see… #CostaDelPrison #Eastenders

That’s some tan Mick’s got whilst away at her majesty’s pleasure #eastenders pic.twitter.com/OmTqPEmP67

Mick has come out of the slammer with a lovely old tan! Didn't know Wormwood Scrubs was so tropical…#EastEnders

#Mick what prison where you in? Thailand? You come out with a decccccent tan lol #EastEnders

Another said: “Has Mick come back with a tan or what? Who knew they had sunbeds in prison.”

A third said: “Did Mick Carter go to an open prison in Spain?? Look at the tan on the geezer!”

“Mick has come out of the slammer with a lovely old tan!” wrote another. “Didn’t know Wormwood Scrubs was so tropical…”

Some fans were actually angry at the soap, slamming them for treating the “fans like idiots” and saying it was “unconvincing”.

In reality, Mick Carter actor Danny Dyer had been taking a break from the soap and enjoyed a well-earned holiday to Florida.

He returned to filming in October and has been filming explosive scenes with his nemesis Stuart Highway, played by Ricky Champ.

We know that the Carter family will be at the forefront of the soap’s Christmas episodes, with a spokesperson telling The Sun: “Mick Carter is finally reunited with his beloved Linda but with revenge on his mind, Christmas will be anything but peaceful for the Carters.”

Are you glad to have Mick Carter back in Walford? Leave us a comment on our Facebook page @EntertainmentDailyFix and let us know what you think!