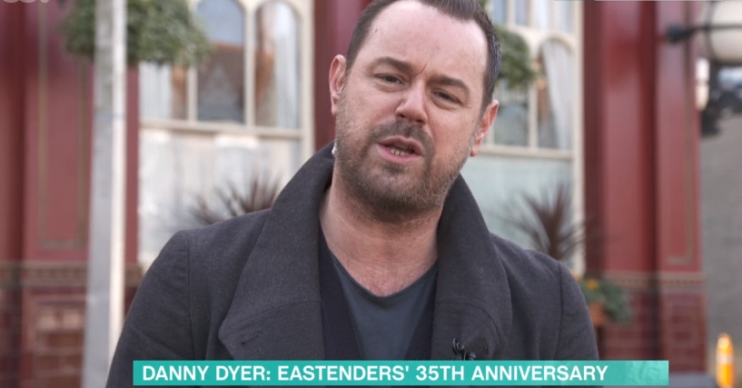 Danny's character Mick is a big part of the show's anniversary

Danny Dyer, who plays Mick Carter in EastEnders, has said he ‘looked like Dot Cotton’ after filming the show’s 35th anniversary scenes.

Appearing on This Morning, Danny spoke about the show’s milestone with Eamonn Holmes and Ruth Langsford.

Ruth asked what it was like filming the water scenes and Danny said: “It took six weeks to film it, so usually for us to film four episodes it takes about 10 days so we spread it out over Christmas.

“So we got the scripts and thought ‘how are we going to pull this off?’ Sort of reading it, it’s so much to do but we did it in a water tank. We thought we were all going to Pinewood and we ended up in Southend in Basildon.

“But like a 10-hour working day in the water you come out all wrinkled, I came out looking like Dot Cotton, in a good way obviously.”

In last night’s episode of the soap (Monday February 17 2020) the show’s anniversary kicked off as Albert Square residents boarded a boat and set off down the River Thames to celebrate The Queen Vic winning Best Pub in London.

However disaster struck when the boat crashed and started taking on water.

Her husband Mick came looking for her and managed to find her, but as the water continued to rise, they struggled to free Linda.