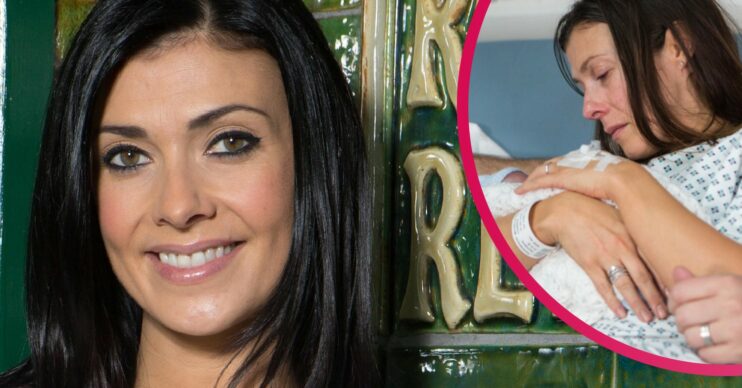 Michelle Connor in Coronation Street: Who was she? Could she return?

She's still got family on the cobbles

Kym shot to fame after competing in reality television show Popstars and becoming part of the band Hear’Say.

In 2005, she turned to acting and appeared in Doctors and Hollyoaks, before landing the role of Michelle.

She stayed on the show for 13 years and won many awards in her time. Michelle’s baby loss story – when her son was stillborn – won her critical acclaim and was inspired by the loss of Kym’s own baby, Archie, who was born prematurely and didn’t survive. Kym said the story was her best way of honouring her baby boy.

Kym recently tied the knot for the third time, to Scott Ratcliffe. Previously she was married to EastEnders star Jack Ryder, and Hollyoaks actor Jamie Lomas – dad to her daughter Polly.

She also has two grown-up children, Emilie and David, from a previous relationship.  And in 2019, when Emilie gave birth to son Teddy, Kym became a very glamorous grandmother!

Michelle was the sister of Paul Connor and Liam Connor, who bought the factory from the Baldwin family and swept into Coronation Street with a bang.

Michelle had a teenage son, Ryan whose dad had been killed in a car accident that Michelle later found out was caused by Liam and Paul.

She started a relationship with Steve McDonald and the pair settled down together in the Rovers along with Steve’s daughter Amy and Michelle’s son Ryan.

When Ryan thought he had a stalker, Michelle was concerned. But it turned out to be the dad of another teenage boy, Alex.

Michelle was shocked to discover Alex was the spitting image of Ryan’s dad, Dean. And it was soon revealed that Alex was her biological son – the boys had been mixed up in hospital.

Both teens reacted badly to the news – not surprisingly – and eventually the parents agreed to keep the sons they had brought up and never speak of the truth again.

But in 2018, Alex returned – now calling himself Ali – and the pair got to know each other. Michelle eventually considered both Ryan and Ali her sons.

Michelle and Steve tied the knot and Michelle was thrilled to discover she was pregnant.

But their son, Ruairi was born extremely prematurely and did not survive.

Michelle’s heartbreak was compounded by the reveal that Steve had fathered another son, Oliver, after a one-night-stand with Leanne Battersby. Their marriage fell apart and Michelle moved on with Robert Peston.

Robert and Michelle’s romance withstood all sorts of pressures, from Robert’s cancer diagnosis to his gambling habits.

But their first wedding day ended in drama when serial killer Pat Phelan showed up and poor Michelle was shot.

The pair tried again, but Robert was keeping an awful secret.

He’d been having an affair with Vicky Jeffries – who thought he and Michelle had split. Vicky was pregnant and Robert was leading a double life.

Michelle found out the truth and exposed Robert on their wedding day. But not before she’d scammed him out of the Bistro first!

When Robert was tragically killed, Michelle left the cobbles behind and moved away to start a new life.

But with son Ryan and bestie Carla still on the Street, perhaps she’ll be back one day?