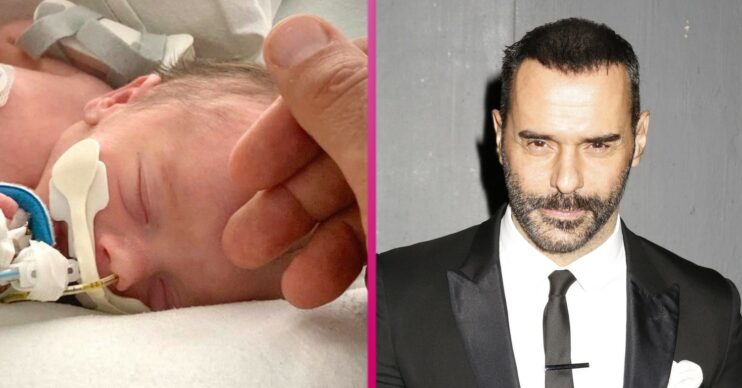 The actor's son will spend six week's in hospital for treatment

EastEnders legend Michael Greco is emotional after his baby son was born prematurely.

However he also revealed he was emotional after his son was born with a birth defect that needs urgent medical attention.

Little Gianluca will spend six weeks in hospital under doctors care until he can go home with his parents.

Michael added: “The little man was born prematurely due to the fact that previous scans had failed to pick up his rare birth defect called Gastroschisis,” wrote Michael.

“The consultant suggested it was best for him to born early so that he could get the necessary care and attention.

“He was born at University College of London Hospital.

“Their staff were extremely professional and Mother and Baby could not have been in better hands.

“Dad was a ‘tad’ emotional to say the least!

“Baby has already had his first operation to replace his bowel where it should belong and is under the worlds best care of Great Ormond Street Hospital where he will be in ICU for a while and most probably for up to 6 weeks.

“My heart is full already and this is by far the best day of my life. I love you Gianluca more than I can ever imagine.”

Michael – who played Beppe Di Marco in the BBC soap from 1998 to 2002 – was congratulated by his friends in the comments.

Read more: EastEnders SPOILERS: Nancy to die after she’s run over by Frankie?

“Congratulations my love! We are so thrilled for you.”

The Office star Lucy Davis added: “Oh Greco I can only imagine how you’re all feeling.

“So many emotions. My heart is full for you too and he is beautiful.”