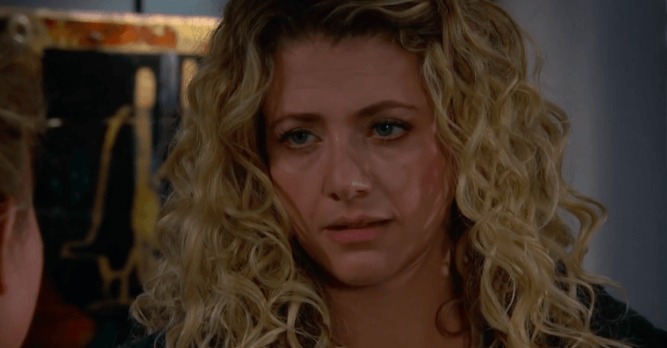 She's left her baby in the village

Fans of the ITV soap grew to hate the teacher, who groomed schoolboy Jacob Gallagher under the nose of his oblivious dad David Metcalfe.

Matthew, who plays shopkeeper David, has now revealed that there’s nothing to stop Maya from coming back in the future.

Is she ever [gone]? Well, she’s out of prison now, so who knows?

Viewers know that Maya was caught out and eventually sent to prison for inappropriate contact with a minor.

When she was released, soap fans were stunned to see she was pregnant.

Shortly after, on Christmas Day, Jacob found Maya’s newborn baby on the doorstep of his dad’s house – and Maya hasn’t been seen since.

When asked if Maya was out of David and Jacob’s lives, Matthew replied: “Is she ever? Well, she’s out of prison now, so who knows?”

Clearly reluctant to give away too much and anger his bosses, he added: “I can’t reveal too much. But there’s a baby in David’s life now, so he’s kind of a single dad looking after this baby.”

He also admitted that his character has “no love interest in the near future”.

Matthew went on to reveal how proud he is of the hard-hitting storyline, adding: “It’s been incredible. It’s been emotional, tiring, we worked closely with Barnardo’s, so it meant a lot to us to get it right.”

Emmerdale viewers were shocked and appalled by the plot, with many begging the sickening storyline to end.

However the cast involved in the storyline insisted the plot was supposed to be repulsive to viewers and that meant it was doing its job.

Matthew added: “People were disgusted by it. But what we were portraying are things we had been told about that had happened to young men.

“It creeped people out and that’s what we wanted to do. I think if we got that across then we did it right.”

Emmerdale won Best Serial Drama at the NTAs this week.

Do you think Maya will return? Leave us a comment on our Facebook page @EntertainmentDailyFix and let us know what you think!