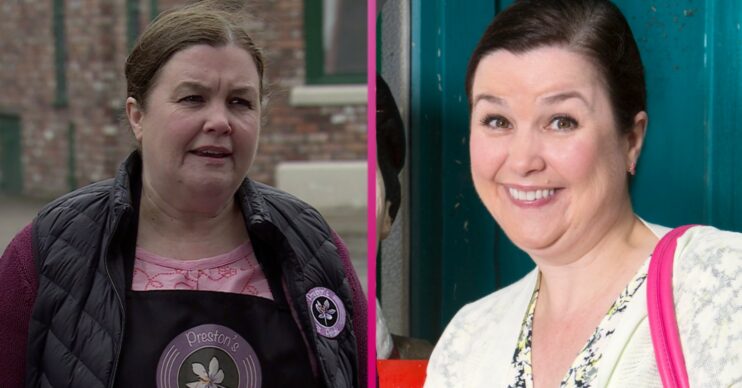 Mary Taylor in Coronation Street: Her dark secrets and big plans for the future

We'd love to see her as Mayor of Weatherfield!

Mary Taylor in Coronation Street is the quirky, kind-hearted florist who is never short of a wise word, an eye-opening anecdote or a funny story. And despite her jovial manner, she’s been hiding some dark secrets about her past.

She was originally a comic character and though she’s still always a source of fun on the show, Mary’s also revealed her tragic backstory and some difficult secrets she’s been carrying during her time on the cobbles.

Read more: 5 soap kids who won awards for their acting

Mary was only meant to be in Corrie for five episodes but she proved such a hit with viewers that her contract was renewed. Mary returned to the cobbles and more than ten years later she’s still making fans giggle with her cheeky one-liners.

Who plays Mary in Coronation Street?

Mary Taylor in Coronation Street is played by actress Patti Clare. She always wanted to star in Corrie and even once wrote her own part – playing a character called Cherise, Raquel Watts‘ sister – but was rejected.

In 2008, though, she landed the role of Mary, proving that you should never give up on your dreams!

Mary was introduced on Coronation Street as a competition enthusiast, who’d developed a crush on Norris Cole.

She tried to seduce Norris but when he resisted, she took things to the extreme and kidnapped him!

Mary held Norris hostage in a remote cottage in a sinister story that had hints of horror film Misery.

After Mary released her captive, Norris was – not surprisingly – reluctant to speak to his kidnapper for a while. But Mary persisted and the pair eventually put their differences aside. They even tied the knot a few years later, though it was actually a scam to win another competition!

Mary’s friends in Coronation Street were stunned when she revealed she had fallen pregnant when she was just 14 years old, after being raped.

She’d given birth to a son, Jude Appleton, who was given up for adoption.

Norris, along with Gemma Winter, helped Mary track Jude down and an emotional Mary was reunited with her son on Christmas Day.

Mary was thrilled with her new family – Jude, his wife Angie and their son George. She stuck by Jude even when he lied about being a marine biologist and broke Angie’s heart.

What’s next for Mary?

Things have been a bit quiet for Mary recently, since she said a sad goodbye to Norris, who died last year.

She briefly got herself involved in local politics, working alongside Maria Connor and Sally Metcalfe to plan the Christmas market in Weatherfield.

And we have to say, we loved her being so civic-minded!

We would love to see Mary as the new Mayor of Weatherfield! What do you think?