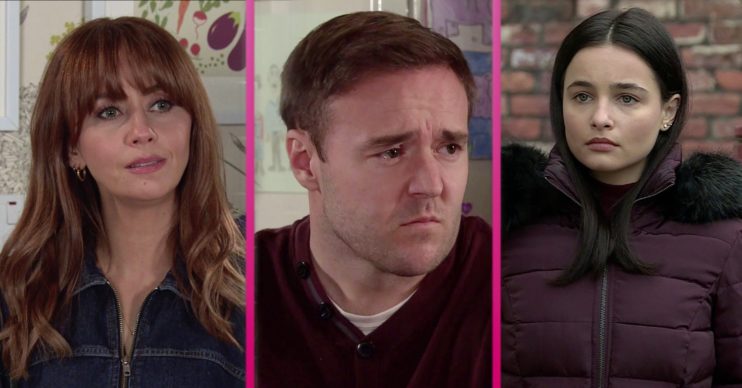 Maria in Coronation Street: What happened between her and Tyrone?

Maria and Tyrone have history!

Maria has been in Coronation Street since 2000 and has a long history with Tyrone Dobbs. But what happened between the two?

In tonight’s episode of the ITV soap (Thursday, April 1) Maria told Tyrone she knows that cheated on Fiz with Alina.

Maria made a consultation with Alina at her pop up salon. But during her appointment, she warned Alina to keep away from Tyrone.

However as Maria made her threat, Alina stood up for herself, biting back at Maria. She brought up that Maria once tried to split up Fiz and Tyrone.

But what is Maria and Tyrone’s history?

Maria in Coronation Street: Her history with Tyrone

Maria first arrived in Weatherfield in May 2000 as a love interest of Tyrone’s.

Tyrone and Maria eventually became engaged however she ended up breaking off their engagement and ending their relationship.

Eventually they got back together and engaged a second time, but Tyrone broke it off realising she would never be happy with him.

Over the years, Maria and Tyrone went on to marry and date other people but managed to remain good friends.

Over the last 7 years, Fiz and Tyrone have lived together raising their children together.

Maria in Coronation Street: Her obsession with Tyrone

However in 2014, Maria went on a downward spiral after she caught her boyfriend Marcus sleeping with Todd Grimshaw.

She began to become obsessed with Tyrone. When Tyrone’s abusive ex-girlfriend Kirsty was released from prison, he opened up to Maria.

However she began sending Tyrone threatening text messages, making it seem as if they came from Kirsty.

Read more: Katie McGlynn in The Syndicate: Does the ex Coronation Street star have a boyfriend?

Police were soon able to confirm Kirsty was now living abroad and the text messages were coming from a UK number.

It was soon revealed Maria was the one sending the messages. Kirk was able to convince Fiz and Tyrone to drop the charges against his sister.

After the incident, she went away for a while to spend some time with her mum. Eventually Fiz and Tyrone were able to forgive her for what happened.