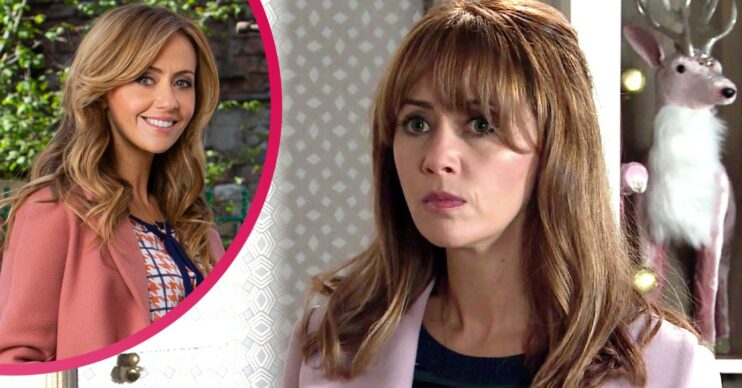 Maria in Coronation Street: how many times has she been married? How many children does she have?

She's made the journey from hairdresser to eco-warrior

She’s married to Gary Windass, is mum to son Liam Connor and stepmum to Gary’s sons Jake and Zack.

And her latest storyline seeing her run for local council is a huge departure for man-eater Maria! Even actress Samia has admitted she’s surprised by the storyline.

So just how did Maria get here?

Who plays Maria in Coronation Street?

Maria in Coronation Street is played by Samia Longchambon.

Samia was just a teenager when she beat both Suzanne Shaw – who later played Eve in Emmerdale – and Girls Aloud’s Kimberley Walsh to the role of Maria.

Before then she’d appeared on the cobbles as an extra, as well as having roles in Children’s Ward, Heartbeat and Doctors.

Read more: 5 plots the soaps NEED to tackle in 2022 from menopause to animal cruelty

Samia’s first appearance was in 2000 and Maria has been at the centre of many storylines since then.

Samia has a daughter, Freya, with her first husband Matt Smith. They divorced in 2011.

In 2013, she took part in Dancing On Ice partnered with Sylvain Longchambon. The pair fell in love and married in 2016, shortly after the birth of their son, Yves.

Maria’s arrival in Weatherfield and romance with Tyrone.

Maria first came to the cobbles when Tyrone Dobbs took his greyhound Monica to the kennels owned by Maria’s parents.

They hit it off and started a romance. Tyrone even proposed on the top of Blackpool Tower.

The pair never got married, though, and they both moved on.

Since their youthful romance, Maria and Ty have reunited once and later Maria – who was suffering with her mental health at the time – developed a toxic obsession with Tyrone.

After she split from Tyrone, Maria had a series of disastrous boyfriends.

She had a romance with Jason Grimshaw, who cheated on her. Then with Nick Tilsley, who whisked her off to Canada only to ignore her. And Vikram Desai used her to smuggle drugs.

She even had a one-night stand with Toyah Battersby’s boyfriend John Arnley, and an affair with nasty Charlie Stubbs – who was later murdered by Tracy Barlow.

Maria in Coronation Street fell in love with Liam Connor and the pair got engaged.

So when Maria discovered her unborn baby had died, she was devastated and found it hard to tell Liam. She gave birth to her stillborn baby boy and named him Paul, after Liam’s late brother.

Later, Carla’s fiancé Tony Gordon discovered Liam and Carla were having an affair, and murdered Liam in revenge.

When Maria – who was pregnant again – found out Tony knew about the affair before he married Carla, she suspected he was involved in Liam’s death.

But despite her suspicions, when Carla left Weatherfield, Maria began a friendship with Tony. He delivered her baby – named Liam – and then proposed. But fortunately, she and Tony didn’t tie the knot and his evil deeds were exposed.

You’d think that after all that, Maria would stay away from Connor men. But after being assaulted by Frank Foster, then having her heart broken by Marcus Dent, and having a romance with Luke Britton, Maria fell for Aidan Connor.

He was having a relationship with Eva Price but began an affair with Maria.

When Eva told Aidan she was pregnant, he called things off with heartbroken Maria.

But at Eva’s hen night, she found out her love rival was faking her pregnancy and in true soap style, Maria revealed all at the glitzy wedding ceremony in some classic Corrie scenes. She and Eva ended up fighting in a fountain!

At the same time as she was falling for Aidan, Maria was being tormented by Caz Hammond – Kate Connor’s ex fiancée.

Caz was fixated on Maria. She began pretending that she was scared of Maria and eventually set Maria up to be suspected of killing her!

Thankfully, though, Aidan found out the truth and Caz’s campaign against Maria came to an end.

But though Maria managed to avoid jail that time, she still ended up behind bars, because she’d married a man called Pablo!

Maria had tied the knot with Pablo in order to help him stay in the country with his boyfriend. And when it was revealed the marriage was a sham, poor Maria was banged up!

Continuing her looooong tradition of disastrous relationships, Maria fell for Gary Windass. She got pregnant and was devastated when she suffered a miscarriage. But the pair eventually tied the knot.

They’ve had a rocky romance, with Maria struggling to cope with Gary’s revelations about his criminal deeds.

But somehow, after all the drama, Maria and Gary have managed to stick together.

Though with Gary being less than supportive of Maria’s new eco-warrior stance, could this be the thing that finally pulls Mr and Mrs Windass apart?

Is Maria running for local council in Coronation Street?

Gary has started to come round to supporting his missus though, and on Tuesday, December 14, suggested she run for local council.

Maria had toyed with the idea previously, wanting to campaign for cleaner air after son Liam was diagnosed with asthma.

But she ended up deciding to support Sally in her campaign instead.

However, with Sally belittling the air issue, Gary is encouraging Maria to rethink and stand herself. By Wednesday Maria’s mind is made up and she tells Sally she’s got a fight on her hands.

Is the local election about to get dirty?

In an interview with Inside Soap Samia admitted she “would never have expected” this storyline for Maria.

“The headline is normally ‘Man-eater Maria’ – not ‘Councillor Maria’!” she revealed.