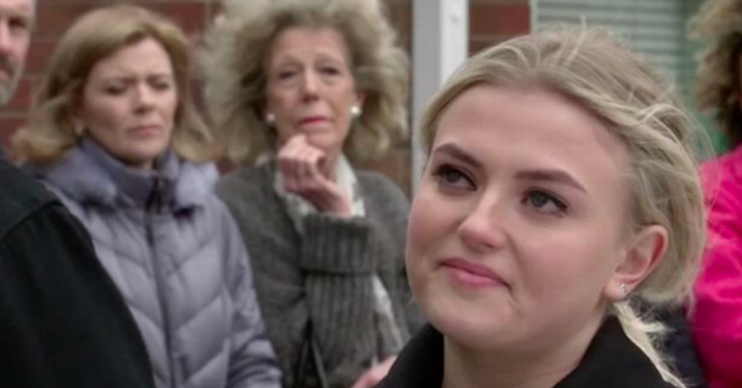 Heartbroken with the realisation that Daniel Osbourne was still in love with his late wife Sinead, Bethany made the sad decision to make a fresh start elsewhere.

On Wednesday (March 4), Bethany made the heartbreaking decision to walk away, deciding that she and Daniel weren’t going to work at this moment in time.

Thank you for the best five years of my life… And that’s all folks.

Having already rushed into their relationship after Sinead’s tragic death, Daniel was seen drunkenly proposing to Bethany.

But the confused and grieving dad dropped a clanger when he said: “Sinead, will you marry me?”

He was also holding out the same wedding ring he gave to Sinead. Oh Daniel, so wrong on so many levels!

Mortified and heartbroken, Bethany later told Daniel she can’t live in someone else’s shadow and was leaving Weatherfield for London – five years after she returned from Italy.

Those watching from home were gutted to see the character go, however actress Lucy Fallon assured fans it wasn’t a goodbye, but a “see you later”.

In a series of emotional tweets and Instagram messages, the soap star told fans it had been “the hardest goodbye”.

She went on to thank the ITV soap, saying: “Thank you for the best five years of my life… And that’s all folks.”

Minutes later, she thanked fans in another post, writing: “Ahh. What an amazing five years I have had, eh???

“Thank you so much for all of the love and support Bethany and I have received over the past five years. I’m going to miss her. Not goodbye, just see ya later. I love you guys @itvcorrie.”

Her followers were quick to reply with messages of support, with one typing: “Good luck in all you choose to do. I’ve loved watching you over the years, from the obnoxious teenager to the confident young woman you’ve kept me entertained.”

Another added: “You have been absolutely amazing, we will miss you.”

A third said: “Good luck with your future projects whatever they may be. You’re a great actress and a credit to the show. You’ll be missed Lucy!”

“Brilliant actress, will miss you on the street,” said another. “But like the fact it’s an ending where you may pop back to visit one day.”

After being away from the cobbles for eight years, the troublesome teen ran away from Milan stealing Sarah’s money to return to England.

Sarah soon followed, furious at what her daughter had done.

During her five years on the show, Lucy’s character has been involved in some big storylines.

After being bullied at school, Bethany was groomed by older man Nathan Curtis, who led her to believe she was in a loving relationship, when he was really charging his friends to sleep with her.

After her abusers were jailed, Bethany was kidnapped by Kayla Clifton, the daughter of rapist Neil Clifton, who believed Bethany was a liar.

However Bethany’s friend Craig managed to prove to Kayla that her father Neil had been part of Bethany’s abuse.

Over the last several months, Bethany has started to fall for Daniel Osbourne, despite him being married to Sinead.

Daniel was left heartbroken after he learned Sinead’s cancer was terminal and ended up kissing Bethany in a grief-stricken state as Sinead lay dying.

After Sinead passed away, he kept his distance from Bethany, but recently they have been helping each other through tough times.

However it just wasn’t the right time for the pair.

Will you miss Bethany on Corrie? Leave us a comment on our Facebook page @EntertainmentDailyFix and let us know what you think!