But actress Louisa Clein, who plays the evil teacher, has told how it's all smiles behind-the-scenes as she shared a snap from filming.

Alongside the image of her with fellow castmates Fiona Wade (Priya Kotecha), Amy Walsh (Tracy Metcalfe) and Roxy Shahidi (Leyla Harding), Louisa is pictured beaming at the camera.

But does it end this happily???? @fionawade1 @amyvwalsh @roxyshahidi @emmerdale ..... tonight's the night all will be revealed. #behindthescenes #emmerdale #bignightout #flashback

The snap was captioned: "But does it end this happily????" she then teased that: "tonight's the night all will be revealed. #behindthescenes #emmerdale #bignightout #flashback."

Fans were quick to comment with many saying they couldn't wait for the reveal eps: "I think you are all phenomenal actresses," said one.

Another added: "Can't wait!! You ladies are amazing!!"

"Honestly you guys work so well together you are all just amazing!!" said a third.

Last night (Monday May 6) viewers saw Leyla confess to Jacob that Maya was dead after she killed her. 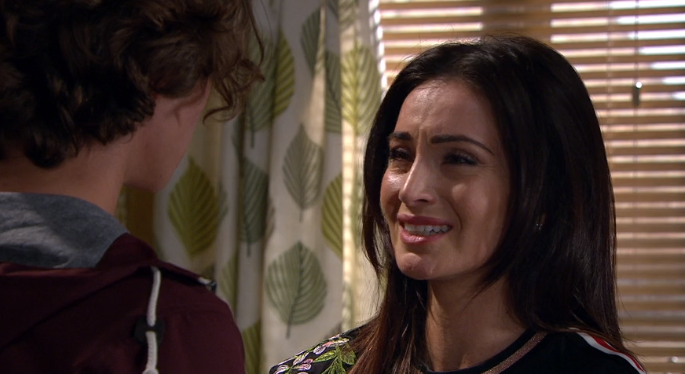 But fans aren't fooled and don't believe she's dead at all - and tonight's the night we'll find out the whole truth.

Is she dead? Is she alive? And will she ever face justice for her abuse of schoolboy Jacob?

During tense scenes two weeks ago, Leyla discovered what had been going on underneath her nose for months...

When the girls went back to the woods to look for her, they found Priya's scarf covered in Maya's blood - and Maya hasn't been seen since.

The bloodied scarf had Maya's DNA all over it (Credit: ITV)

Tonight we'll finally see how Maya's night unfolded as Leyla confesses to Jacob what happened after her, Priya and Tracy got Maya in the car at the end of the night.

Actress Roxy Shahidi, who plays Leyla Harding, has explained that the evening took a "very dark turn" and that her character's "life will change massively" afterwards.

But does it end this happily?

Speaking for the first time about the hugely explosive storyline, Roxy revealed that her character was left angry and guilty after discovering her son had been abused for months without her knowing.

Talking to Digital Spy, she said: "It's Leyla's worst nightmare. The girls went through a range of emotions and were totally conflicted about what to do. Should they call the police? Should they take matters into their own hands?

"Leyla wanted Priya to drive them to the airport to get to Jacob initially, but something unexpected happened on the way that changed the course of the evening and things took a very dark turn."

She added: "The enormity of it all weighs especially heavy on Leyla, who has not been completely honest with Priya and Tracy about what happened."

Are you looking forward to the big reveal? Leave us a comment on our Facebook page @EntertainmentDailyFix and let us know what you think!