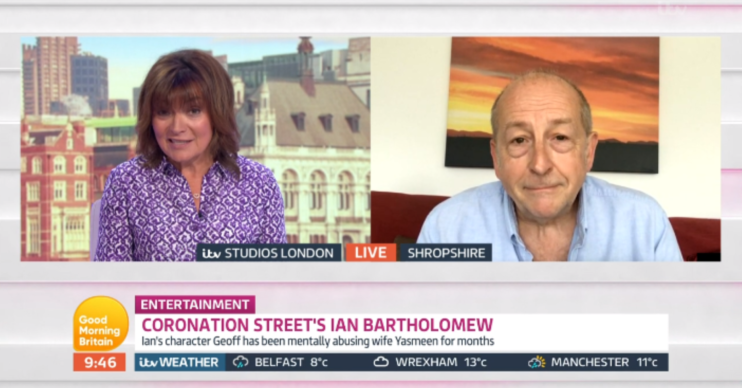 Lorraine Kelly was forced to apologise on today’s Good Morning Britain (Wednesday, April 29) after she cut off her interview with Coronation Street star Ian Bartholomew.

In today’s instalment of GMB with Lorraine, the host spoke with Ian, who is a big part of Corrie’s coercive control storyline, playing Geoff Metcalfe.

During the interview, the actor spoke about the plot and how he feels about playing his abusive alter ego.

Towards the end of the interview, Ian spoke about how the coronavirus had caused the show to stop production and how he went from working flat out to not working at all. But he was quickly cut off.

As Lorraine tried to end the interview she said: “Ian, thank you so much for joining us this morning. If anyone can work it out, the guys at Corrie will get it sorted thank you so so much.”

Ian went to respond saying: “It’s been a delight -” before his call was faded and cut completely.

Lorraine went on to say: “Corrie continues tonight at half past seven. Sorry Ian.”

Viewers also picked up on Ian being cut off and weren’t happy.

#Corrie #Evil #Geoff Ian got cut off #lorraine he's not going to be happy tonight. pic.twitter.com/1vaKqNlUOk

#lorraine How rude cutting Ian the actor who plays Geoff off this morning whilst he was speaking!

Speaking about his abusive alter ego, Ian talked about how his kids will no longer watch the scenes as they don’t want to see their dad be horrible.

He said: “They didn’t want to watch. They saw me lock Yasmeen into the box, into the magic box and they said ‘no can’t watch dad doing that’. So they haven’t watched it since then and I can’t blame them.

“It must be quite difficult for them to watch their dad being rather unpleasant all the time.”

The actor also explained whilst it’s been difficult for him to play such a horrible character, he revealed it has been a great help working with co-star Shelley King, who plays Yasmeen.

He added: “It’s been difficult because he is so not the sort of person I would want to be or would want to be around. And the fact that I’ve had to be playing it has been helped greatly by Shelley, Shelley King who plays Yasmeen, we both get on extremely well.

“We trust each other. So that’s made it a lot easier but no the children don’t watch it.”

What happens next with Geoff and Yasmeen?

This week, Geoff and Yasmeen will get into a scuffle which sees Yasmeen attack Geoff in self defence.

But Geoff ends up slumped on the kitchen floor. Is he dead?