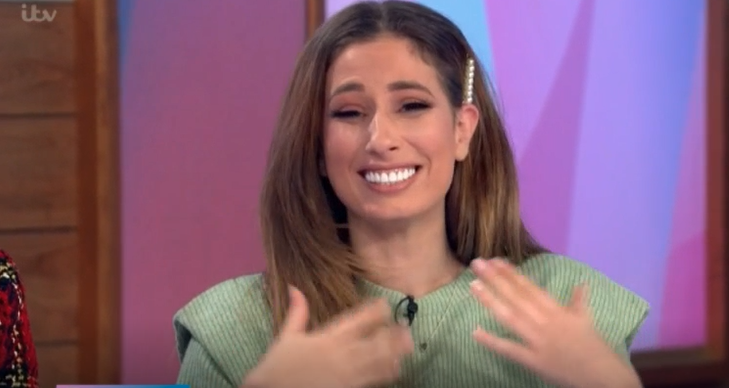 Gail mentioned Stacey as she spoke to her son David!

In the episode, David Platt realised his wife Shona was starting to emerge from her coma after playing her recordings of the cafe and his children.

As David rang his dad to tell him that it may not be long before Shona comes home, his mum Gail approached him reminding him doctors said Shona could have a long road to recovery and there’s no guarantee she’ll get back to normal.

David told his mum if she wanted to keep visiting she needed to be more positive and Gail replied saying: “I’m a very positive person.”

When David asked how, she replied: “Well, if I were on the Loose Women panel I’d be Stacey Solomon.”

David then asked her what she meant by that and Gail said: “Well she’s always very perky.”

Stacey responded on her Instagram story saying: “Well this has made my night. Love you @coronationstreet thank you @villagewaxmelts for tagging me I missed it before I could record.”

The show’s mention was also brought up on today’s Loose Women (January 16 2020).

After the clip played Stacey said: “Oh my god, that is the highlight of my week honestly, I’ll tell you I spat my drink out I was like ‘Gail’s talking about me.'”

Read More: Coleen Nolan hits back at claims Ruth Langsford has ‘had enough of her’ on Loose Women

Christine Lampard also thanked the soap for the mention.

Well this has made my night. Love you Coronation Street

Last year Lorraine host Lorraine Kelly appeared on the soap as Gail shot her in the leg with an arrow at a holiday park.

The show host also appeared in the ITV soap as a police officer back in 2012.

Last year, Piers Morgan was also mentioned on the show and was left confused as to why Gail Platt wanted to throw a tomahawk at him.

Gail is obviously is a big fan of British daytime TV!

Did you hear Stacey’s mention on Corrie?