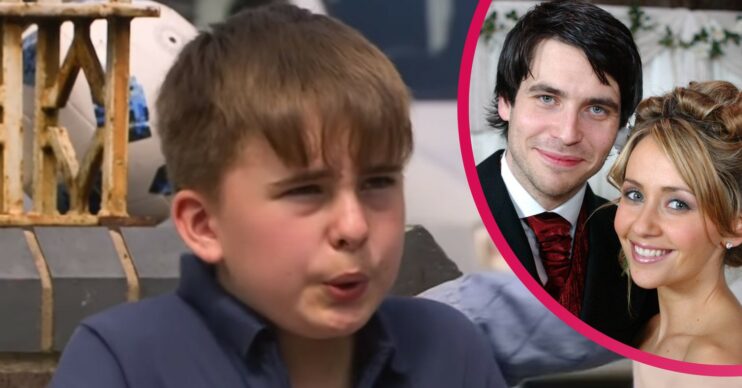 Liam Connor Jr in Coronation Street: How old is he? And who is his dad?

Liam Connor Jr in Coronation Street is being dragged into his mother Maria’s political career as she is harassed online.

The lad has grown up on the cobbles and is Maria’s very reason for fighting the environmental cause. But that doesn’t mean he’s happy about it!

So who is Liam Connor Jr? How old is he? And who is his dad?

Read more: Coronation Street fans demand to know where character is after absence

How old is Liam Connor Jr in Coronation Street?

Liam Connor Jr is the son of Maria Connor and Liam Connor.

He now has two stepbrothers, Jake Windass and Zack Rubenstein.

Who is Liam’s dad?

Maria and Liam were married, but Liam was killed in a hit and run orchestrated by Tony Gordon in 2008.

Liam had been having an on-off affair with Tony’s fiancée Carla, and she was planning to leave Tony for him.

At Tony’s stag do, he organised for Liam to be killed and he was hit by a car and left for dead.

Tony knelt beside him as he died telling him: “The best man lost”.

Maria, who had been on her way to tell him she was pregnant with their baby was distraught he never got to find out he would be a dad again.

Liam Jr’s birth was a dramatic affair when Maria went into labour at the beach with Liam’s killer Tony by her side.

She named her son Liam Jr after his late father.

Maria then got involved with Tony romantically, but when he confessed he had killed Liam, things ended. Maria and Liam Jr then moved to Ireland for a time.

Liam has had many other father figures in his life due to Maria’s many, many romantic entanglements!

Marcus Dent was Maria’s partner for a time, but when he slept with Todd Grimshaw, things ended badly. Although Liam did end up seeing Marcus regularly after the split.

Liam faced a tough test when Maria was imprisoned in 2016 for marrying Argentinian Pablo Duarte to help him stay in the UK with his boyfriend.

She was fortunately released after only three months.

Gary Windass, Maria’s husband, is the latest father figure in Liam’s life, but will he last the distance?

In August 2021, Liam developed a chesty cough while playing football in the street and collapsed, struggling to breathe,

He was taken to hospital and diagnosed with asthma.

The diagnosis has led Maria on her mission to clean the air of Weatherfield.

Her environmental campaign has seen her join local council and fight for extra recycling bin.

When he was born, Liam was played by Imogen Moore and Logan Pearson.

Charlie Wrenshall began playing him in 2012 and still plays him to this day.

Charlie was born on March 4 2009, making him already 13 as he’s four months older than his alter ego.

Liam hasn’t appeared on screen a lot lately, but is back this week after Maria was called into the school.

Later this week he will celebrate his 13th birthday with a Star Trek themed bash.