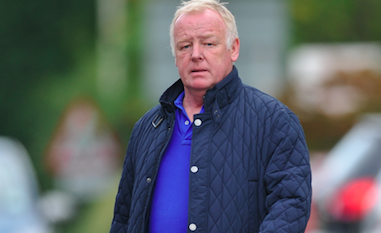 In a story which could be described as stranger than fiction, a lifelong Les Dennis fan has publicly slammed his former idol for “letting him down”.

Jake Goldstein, 28, was desperate to name his Brighton pub after his favourite TV star, the Les Dennis Lounge.

However, in a heartfelt post shared on social media, Jake claims the former Corrie star, 65, refused to allow it.

According to the Brighton Argus, 28-year-old Jake recently took over The Globe pub in Middle Street, Brighton, and had dreams of opening a Les Dennis Lounge.

However, after years of following the career of the TV celebrity, Jake says he was “let down” by Les who turned down the offer and reportedly refused to have the pub named after him.

Jake has now filmed himself delivering a heartfelt message to Les, entitled “Calling Out Les Dennis”.

Alongside the film, Jake wrote: “We called up Les Dennis and asked if we could open a bar in his honour. He said no. […] Here is a little message to Les about how we feel.”

In the video Jake, apparently drinking a glass of milk, says: “Les Dennis let me down. Don’t get me wrong Les, I think you’re all right.

Jake continued: “All I wanted was to open a lovely little bar in Brighton for all little Les Dennises in the world to play, but you had to ruin it, didn’t you, Les?

“When we called you up full of hope, can we open the Les Dennis Lounge, your name in lights Les, you seemed so into it.

At the time of writing, nearly 1,000 people had viewed the video.

Jake went on to say that he’d always been a fan of the Liverpool-born TV comedian, who had his own show in the 80s and 90s, before appearing on the likes of Coronation Street and Extras opposite Ricky Gervais.

The disillusioned pub landlord says he’s now been forced to find other ways to honour Les in his pub – now named Cease And Desist – and says there will be pictures of the actor on the walls, as well as Les masks for the punters.

The tongue-in-cheek nod to the comedian is, says Jake, in an attempt to create “somewhere that’s really fun and a place for people who are up for a laugh”.

Jake, who has even created a bittersweet Les Dennis cocktail, told the local newspaper: “It’s made in honour of the man himself.

“When we spoke on the phone he said his agent wouldn’t like us naming it after him in case something bad happened at the bar which could reflect badly on him.

“We weren’t overly happy with his decision but very amicable.”

One of Jake’s Facebook friends cheekily suggested Jake should name the pub The Amanda Hold Inn after Les’ ex-wife.

ED! has contacted Les Dennis’ agent for a comment.

Would you drink in a pub named after Les Dennis? Leave us a comment on our Facebook page @EntertainmentDailyFix and let us know what you think!