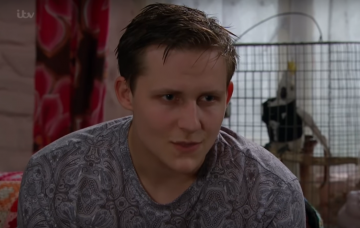 The net is tightening around Lachlan White as police uncovered bloodied rags buried in the woodland in last night’s Emmerdale.

Serial killer Lachlan believed he had destroyed any evidence hinting at his aunt Rebecca’s imprisonment – and possible death – after deciding to torch the cabin where she was kept hostage.

But in lighting a huge blaze, the rattled teen psychopath sparked the interest of the authorities – who initially pondered whether the fire could have been an insurance job by Joe Tate.

However, once police sniffer dogs were on the scene they found a possible tell-tale clue which indicated a more serious matter than arson had occurred.

Rebecca’s fate has been left up in the air for the past two weeks, but viewers thought the question of whether she is alive or dead had finally been settled as Lachlan was shown loading the suitcase suspected to contain her body into a car.

He almost managed to accidentally add another body to the list of deaths he is responsible for as flames tore through the cabin, putting the life of Zak Dingle, out walking pet dog Monty, in danger.

Worried his plans may have killed girlfriend Belle’s dad, Lachlan was not off the hook when it was confirmed Zak and Monty had escaped injury.

His answers obviously didn’t satisfy her as Lachlan’s was the first name she brought up to police as they later tried to work out what caused the blaze.

However, they were interrupted by another officer reporting on a grisly find by the police dog.

Partially buried in the ground around the cabin site were the rags – apparently covered in blood.

But whose blood? And how do these bits of cloth relate to Lachlan and Rebecca?

Will they incriminate him and see his reign of terror halted for good?

Some viewers certainly hope so. They can positively smell it… unlike any Emmerdale characters and petrol fumes, apparently…

No wonder Joe got rid of the security at Home farm if the dog didn’t even bark when it walked past Lachlan hiding behind a tree @emmerdale! Also surprised that Priya (and the guy she was with) couldn’t smell the petrol on the shed or on Lachlan himself 🤦🏻‍♀️.

Is the game up for Lachlan? Let us know what you think of this story by leaving us a comment on our Facebook page @EntertainmentDailyFix!