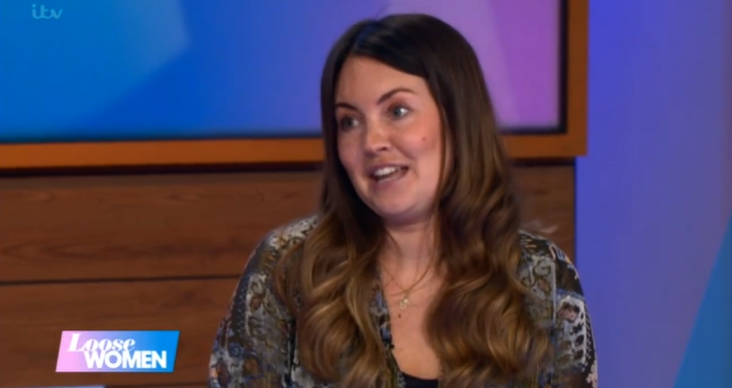 Lacey Turner, who plays Stacey Fowler in EastEnders has opened up about life post-birth in an interview on Loose Women.

Appearing on the show to talk about her heartbreak at suffering two miscarriages before eventually giving birth to baby Dusty in July last year, Lacey also chatted with the ladies about what happens after you’ve had the baby.

The discussion came off the back of the American advert banned for being too graphic, which showed a woman, still in her post-birth underwear, going to the toilet.

Speaking about the often taboo subject, Lacey told the women: “No one told you how much it hurts going to the toilet after you’ve given birth.

“That was more painful than the actual birth!”

The other panellists – Christine Lampard, Stacey Solomon, Nadia Sawalha and Jane Moore were quick to agree with her.

Lacey also revealed she had had an “amazing” birth, following a fairly traumatic pregnancy with her little girl.

“It was amazing. I had the most unbelievable birth.

“I watched my mum give birth to my sister when I was 13. I think it was my mum’s form of contraception! But it was truly amazing.

“I woke up with a tummy ache at 2am, went to hospital at 3am. Had her at quarter to nine and I was home by half five, cleaning my house… We were on cloud nine.”

That was more painful than the actual birth!

During the interview, the soap star spoke out on how she didn’t think she’d have a baby after suffering two miscarriages.

The star didn’t let herself “get excited” until later in her pregnancy because she was “so scared” of losing another baby.

She said: “I didn’t get excited until I was about 20, 25 weeks… I was so scared. Until you can feel kicking, you don’t actually know anything is there…

“Because I thought this might not work, I just became really laid back about the whole thing. It is what it is…

“I just felt numb to the whole thing, so anything that was happening in there, I was just, ‘Oh that’s great’. But not how you should feel.”

The 31-year-old actress admitted she was putting “so much pressure” on herself after her miscarriages, and she had almost given up hope on falling pregnant for a third time.

She added: “It took us ages to get pregnant, I put so much pressure on myself to fall pregnant that actually it wasn’t happening. It got to the point where I said to Matt, ‘Just forget it, we’ll get a puppy’.

“It’s not the same, but… As soon as I said that, we fell pregnant. I remember I was in the bath and Matt said ‘Oh, it says pregnant’. I said, ‘Well don’t get excited’.

“I felt horrible that I wouldn’t let him get excited about it, and I ignored it until I was 14 weeks. I honestly ignored it, I carried on, I carried on eating chocolate yogurts and all the things you shouldn’t eat.”

Lacey – who is currently on maternity leave from the BBC soap – candidly admitted while she knows why she reacted in that way, part of her wished she’d enjoyed being pregnant more.

She explained: “A little bit. I understand why I dealt with it in that way, but it would’ve been nice if I could allow us to be more excited… You just protect yourself a bit.”