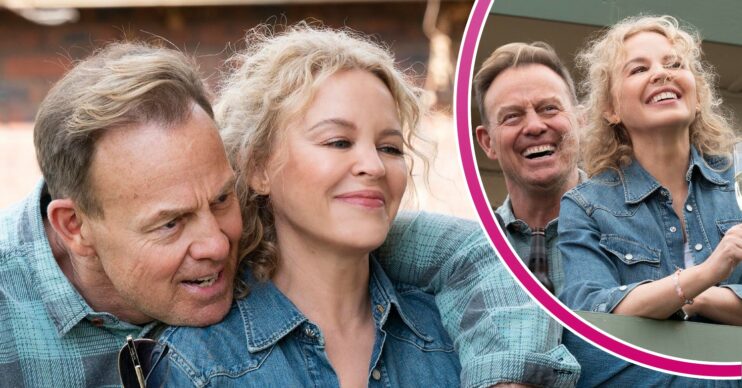 Scott and Charlene are coming back for the final episode

Kylie Minogue and Jason Donovan have teased their return ahead of the final episode of Neighbours.

They have also revealed something very important is returning with their characters Scott and Charlene.

Read more: Neighbours characters: ‘Best Ever Awards’ – and we’ll have no arguments!

Today (Friday July 29) the final episode of Neighbours will air in the UK.

The Australian soap is coming to an end after 37 years on air.

The final week has seen the return of many familiar faces including Chris Pappas and Joel Samuels.

However Scott and Charlene Robinson will be making a return for the show’s final episode.

Now Jason and Kylie have revealed something important is returning with them.

Kylie added: “The curls are just as big, and mousse is back!”

Being back on Ramsay Street

They were also asked how it felt to be back on Ramsay Street.

Kylie responded: “It feels amazing, surreal and very emotional. We worked with the director we worked with back in the 80s so a few familiar faces.

“Same houses, same street – there is no easy answer, just a mix of emotions, but very happy. Very aware of the moment.”

Speaking about his return, Jason said: “Yes emotional. So many memories. And something you have to ‘scream’ about the moment, and this is one of them, we’re very aware of the significance.

“It’s not lost on us in terms of what this show has given us, the cast, writers, directors, the country, the way it has portrayed Australians around the world, it changed a lot of things for a lot of people – now it’s time to scream about it.”

When is the final episode of Neighbours airing in the UK?

The final episode of Australia’s longest running drama will air in an emotional finale at 9pm on Friday July 29 2022.

UK fans will be able to watch the antepenultimate episode in the usual transmission slots at 1.45pm and 6pm on Friday, July 29 on Channel 5.

Will you be watching the Neighbours finale? Leave us a comment on our Facebook page @EntertainmentDailyFix, and let us know what you think of this story