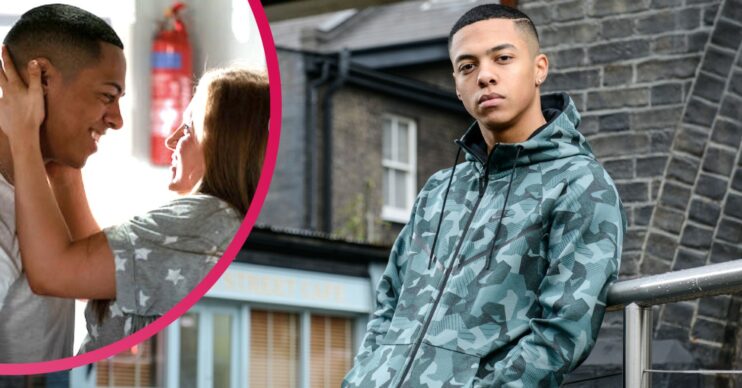 Keegan Butcher-Baker in EastEnders: Is he leaving Albert Square for good?

He’s married – officially – to Tiffany Butcher-Baker but the two have split after Keegan had an ill-advised one-night stand with Tiff’s frenemy Dotty Cotton.

Keegan is one of the Taylor/Baker clan. His mum is fierce matriarch Karen Taylor and his dad is Mitch Baker.

So that makes him the brother of tragic Chantelle Atkins, who was brutally murdered by her husband Gray.

In fact, Gray invested in Keegan’s sandwich business, Butcher-Baker, which we all know was mostly to butter up his brother-in-law and make himself feel less guilty.

Keegs is also half brother to Bailey Baker, and Keanu, Bernadette, Riley and Chatham Taylor.

From the moment Keegan arrived in EastEnders, he and best friend with Shakil Kazemi were getting into trouble,

Keegs even made up a lie that he’d slept with Louise Mitchell – making the concerned teenager think she had been raped because she couldn’t remember it.

Keegan always had an eye for a prank, but when he stole a bike and brought it back to the Square things took a deadly turn.

Shakil saw a pic online and realised the bike belonged to some gang members. Shaki tried to return the bike, but the gang were already on their trail and after a confrontation both Shakil and Keegan were stabbed.

Mick Carter found bleeding Keegan and called an ambulance. But because Keegs had been stabbed in the neck, he was unable to tell Mick that Shakil was also bleeding. It wasn’t until the next day that Shakil was found and he died from his injuries.

Guilty and heartbroken, Keegan went on a downward spiral, messing with drugs and getting involved in a gang himself.

Things came to a head, when a troubled Keegs ended up being trapped by the gang and he stabbed one of them in shocking scenes.

But Shakil’s mum Carmel came to his rescue – in a way. She told him he’d killed the lad and a guilt-stricken Keegan turned himself in, only to discover Carmel had lied. There had been no murder – but there could have been. Carmel had given him the wake-up call he needed.

After a lot of soul-searching, Keegan realised he had to change his life.

He suffered a lot of bad luck initially and was turned down for business loans, and even being subjected to racism. He lost one contract when he arrived late to deliver the sandwiches, thanks to being stopped by the police.

But Keegs is nothing if not determined. He focused on his business and it’s now a huge success, with Keegan even being nominated for awards.

Are Tiffany and Keegan Butcher-Baker married in EastEnders?

He got together with Tiffany Butcher and for a long time it seemed they were for keeps.

The cute pair were so devoted to one another that they decided to tie the knot, though their families thought they were too young.

Keegan and his bride ran away to Scotland to say ‘I do’ with their families in hot pursuit, determined to stop them walking down the aisle. But when Keegan declared his love for Tiff, their disapproving families were won over and the pair got hitched. Aww.

But their fairytale romance fell apart when Tiffany began struggling with her self-esteem. She started worrying about her looks and spending money the young couple didn’t have on fillers.

And while she was not telling Keegan about her worries, his eye was caught by Dotty Cotton.

Read more: Who is Aaron in EastEnders? Where have you seen Charlie Wernham before?

Tiff was heartbroken when she found out her husband had cheated. Now she’s seeing Aaron Monroe but we’re sure she still loves Keegan, really.

Meanwhile actress Maisie Smith has left EastEnders to focus on other projects.

She filmed her final scenes last month which means she’ll only be on our screens for a few more weeks.

Exec producer Jon Sen has confirmed that Tiffany won’t die, but we’re in the dark about how she’ll wave goodbye to Albert Square.

Rumours have been rife that Maisie and Zack Morris are a couple in real life.

The pair were seen together away from the EastEnders set. And sharp-eyed fans even sotted them going into Zack’s flat together after going to the cinema.

But Zack took to social media to rubbish the claims that he and Maisie were more than friends.

“Don’t buy into all the gossip, people,” he told his followers.

Do you think Keegan will be leaving Albert Square soon?