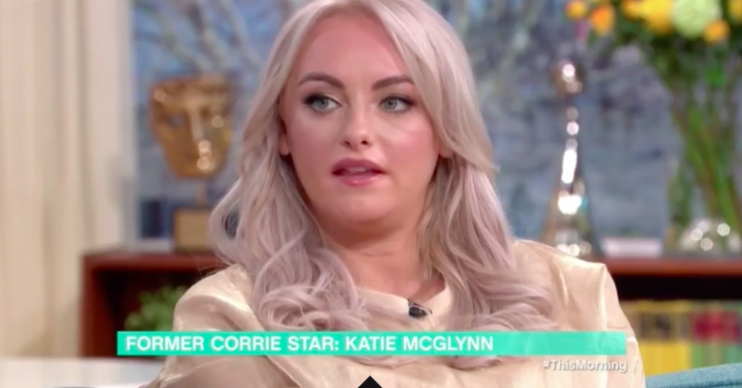 And she's set her sights on Hollywood, too!

Former Coronation Street star Katie McGlynn could be in full camouflage next time you see her, as the actress has revealed she’d be up for a role on Our Girl.

The actress, 26, would be replacing another ex-Weatherfield resident Michelle Keegan, who will step down from the BBC show after the fourth series which is due to air later this year.

Katie appeared on This Morning on Thursday (January 30), fresh from her NTA win on Tuesday night.

When asked about her post-Corrie future, she told hosts Phillip Schofield and Holly Willoughby that she’d love to work on Our Girl, but she’s also set her sights on Hollywood.

I just want to do something completely different. I’d like to play someone evil.

She said: “In an ideal world, I would love to get an ITV gritty drama. I’d love that. Or a series on Netflix.

“I just want to do something completely different. I’d like to play someone evil.”

When Phil suggested Katie could replace departing Michelle on Our Girl, Katie replied: “I could do! I have got a little tomboy streak in me. That would be good. I’d like to do something like that.”

In response to Holly’s question about cracking Hollywood, Katie said: “I am planning to go to LA at some point. At the moment it’s about doing the self tapes, auditions, meetings, then hopefully one will come up that works timing wise.”

She also admitted she’d had some “weird and wonderful offers from various things” but said she “just wants to concentrate on acting”.

Was she hinting at reality TV?

Reliving the moment she won the award for Best Serial Drama at the NTAs on Tuesday, Katie said: “It is amazing to win this award, but my main concern was raising awareness for cancer.”

She explained: “It sounds so self-indulgent, as though I’m saving lives, I’m not, I just played that character, did the storyline. But I can’t tell you the feeling you get when young girls tell you they’ve been for a smear test and have abnormal cells.

“When it had a huge impact, me and Rob Mallard [who played her on-screen husband Daniel] were pretty shocked, so I’m so, so glad we’ve done that for that reason.”

Katie’s moving portrayal of cancer sufferer Sinead Tinker left Corrie viewers in bits, not least when she passed away last October leaving her son Bertie without a mum.

After her NTA win, Katie thanked fans for their support on social media.

Who would you like to see replace Michelle Keegan on Our Girl? Leave us a comment on our Facebook page @EntertainmentDailyFix and let us know what you think!