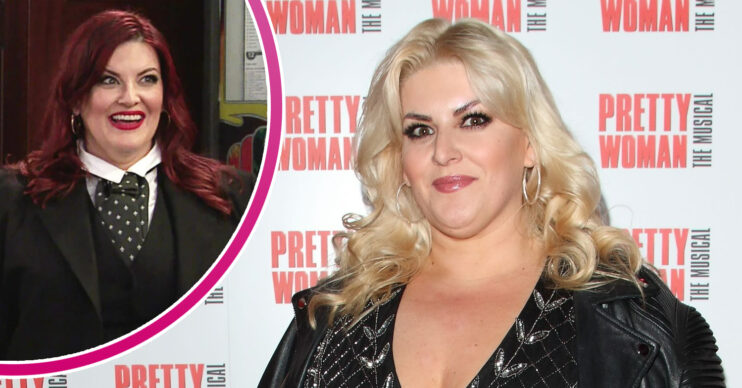 Jodie Prenger in Coronation Street: Who does she play? Where have you seen her before?

Jodie Prenger has arrived on to the cobbles of Coronation Street, playing George Shuttleworth’s sister, Glenda.

She may be new to the Street but this is far from her first rodeo in the acting world, first starting a successful career in the industry in 2008, when she won the BBC talent contest, I Do Anything.

So, what do we know about both Jodie and her alter ego? Who is Glenda Shuttleworth? Where have you seen Jodie Prenger before?

Who does Jodie Prenger play in Coronation Street?

Growing up as a big Corrie fan, Jodie recalled on Loose Women earlier this week how she was starstruck when she first met the likes of Barbara Knox, and even did “a weird curtsy” when meeting Bill Roache.

What do we know about Glenda in Coronation Street?

Glenda is introduced as a character with a big personality, ready to take control of things and keep her brother in line.

She certainly means business and doesn’t shy away from difficult situations.

In Jodie’s first scenes, Glenda can be seen acting as a true hero, saving the Shuttleworth business.

George is unable to carry out his duties at Mr Pugh’s funeral, but luckily his sister Glenda arrives and soon takes charge.

George is certainly pleased to see his sister, although he had no idea that she was going to turn up.

Eileen, however, will soon become irritated with Glenda’s confident and bold personality.

Speaking on Loose Women about her new role as the feisty Glenda, Jodie noted that the character is a lot like herself.

“She’s out there. She’s camp. She’s fun… and she just loves people!”

And, on the topic of Glenda’s backstory she shared: “She’s off a cruise ship and she had to leave because she had a ding-dong with a percussionist.”

Glenda’s backstory gives a nod to Jodie’s own life, as she too was a cruise ship entertainer back in 2001.

What else has Jodie Prenger been in?

Jodie Prenger first appeared on screen in 2006 but she didn’t make her TV debut as an actress.

Instead, she appeared on the reality TV show, The Biggest Loser.

It wasn’t until 2008 that Jodie started to make a name for herself as an actress as she won Andrew Lloyd Webber’s musical talent show, I Do Anything, which saw her earn the role of Nancy in the West End production of Oliver!

She has since embarked on several UK tours including Annie and Shirley Valentine.

In fact, during her career as a theatre performer she starred in the Coronation Street musical, Street of Dreams, where she played Elsie Tanner.

Moving back on to the screen, Jodie has appeared in shows such as Casualty, Waterloo Road and had a more regular part in the series, Run.

No, Jodie Prenger is yet to marry.

She’s been engaged to her partner, Simon Booth, for 10 years but is yet to tie the knot.

Simon proposed to Jodie two years into their relationship in 2012, around the same time that her father passed away.

The couple are still as strong as ever.

Jodie Prenger and her love of animals

Jodie loves animals and has too many to name, with her house slowly turning into a zoo.

She has cows, six dogs, three cats, ducks and chickens.

On Instagram last year, Jodie shared a close up of one of her dogs in an adorable snap.

Fans loved the insight into her life.

One commented: “So cute!”