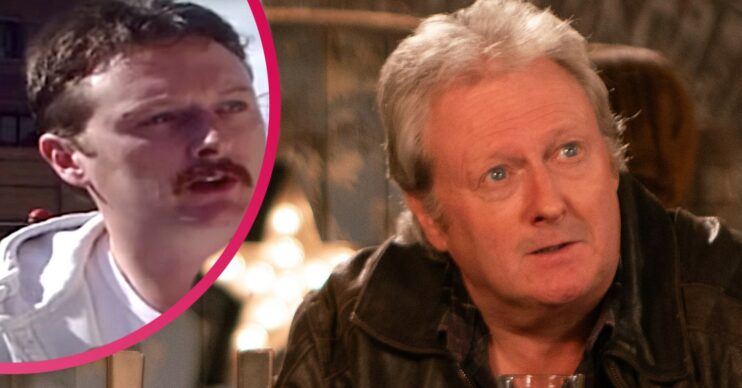 Jim McDonald in Coronation Street: Is he on his way back to Weatherfield?

He's still got family on the cobbles but would anyone be pleased to see him?

Jim McDonald in Coronation Street is the jailbird, murderous dad of Steve McDonald.

He’s the former husband of Steve’s mum Liz, and grandfather to Steve’s kids, Amy Barlow and Emma Brooker (though we’re not sure if he’s actually met Emma!).

Jim’s first stint on the Street

The McDonald family – Jim, Liz, and twin sons Steve and Andy – moved to Coronation Street in 1989.

Jim worked in the garage for a while, and the family settled down in Weatherfield. But when he and Liz lost their baby daughter Katie shortly after she was born, things fell apart.

The McDonalds’ marriage became volatile and violent and Jim ended up in prison when he breached a restraining order.

Jim went to prison again after he savagely beat Steve’s nemesis Jez Quigley in revenge for him attacking Steve. Jez died from his injuries and Jim turned himself in, full of guilt.

He was sent to jail for eight years. But a few years later, convinced Liz was having an affair, Jim broke out of prison and tried to escape to Ireland.

His efforts to flee didn’t work, though, and he was soon back behind bars.

Later he went to jail again for robbing a bank. He got to know Peter Barlow inside, and treated him cruelly by giving him alcohol and blackmailing him to contact Liz on his behalf.

During his time in prison, Jim was diagnosed with a degenerative illness called myotonic dystrophy.

Steve and Amy were both tested for the disease in 2016 and were relieved to find they were both unaffected.

In 2018, Jim showed up in Corrie with a young woman called Hannah Gilmore. He claimed she was his and Liz’s daughter, Katie, who they’d been told was dead thanks to a hospital mix-up.

Liz was overjoyed to have her daughter back from the dead but Steve and Tracy were more cynical.

And they were right to be.

Hannah wasn’t Katie – of course. Instead, she was Jim’s secret lover and the pair had cooked up the scam in order to fleece poor Liz out of her life’s savings.

They tampered with a DNA test to ‘prove’ Hannah was who she said she was, and even resorted to blackmailing Johnny Connor – who’d had a fling with Liz – to get their hands on more cash.

On the day of Steve and Tracy’s wedding, the truth was revealed to a horrified Liz who – unknown to Jim – was in the bathroom while he and Hannah discussed their fraud. Liz clocked them kissing and the truth was out!

Liz was heartbroken, but Jim fled with Hannah. Later Liz was told they’d been arrested but released because there wasn’t enough evidence to charge them. No one has heard from them since.

Why do people think Jim could be Emma’s dad?

Back when Jim was first living on the cobbles he had a one-night stand with Steve’s ex-girlfriend, Fiona Middleton.

Not long after their liaison, Fiona realised she was pregnant. She was engaged to Alan McKenna and Jim stopped their wedding to announce that he thought he could be the dad of Fiona’s as yet unborn child.

Alan dumped Fiona, but Steve was so disgusted with his dad that he helped his ex when her baby – a boy called Morgan – was born. And the pair got back together.

Jim discovered he wasn’t Morgan’s dad after all. But Steve and Fiona split when he cheated on her and Fiona left Weatherfield for good.

Of course now we know when Fiona left the cobbles, she was pregnant with Steve’s daughter, Emma.

Charlie trained at the Guildhall School of Music and Drama, where he met his good friend Adrian Dunbar (aka Ted Hastings in Line of Duty).

He had roles in various television dramas including Harry’s Game and Four Days in July, as well as Doctors, The Bill and Rosemary and Thyme.

Is Jim McDonald coming back to Corrie?

In a recent interview for GB News, Charlie revealed he is in contact with Corrie producer Iain McLeod.

“There’s every chance my character could make a comeback,” he told fans.

“But it’s not going to be as easy as my last return a few years ago.”

Would you like to see Jim back in Coronation Street?

Coronation Street is on ITV3 every week day at 3pm and 3.30pm.