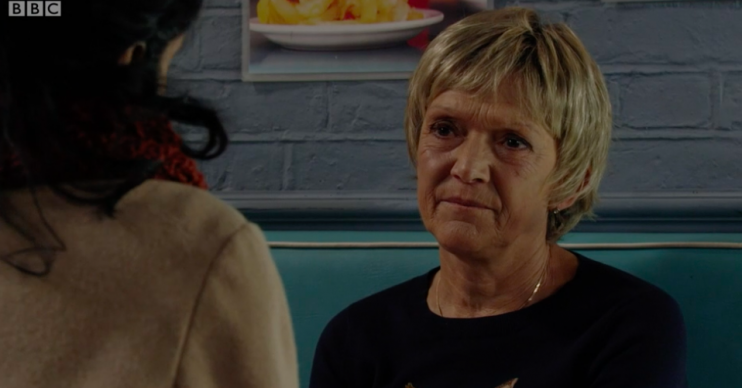 Suki Panesar will be confronted over her cancer ‘diagnosis’ next week, and EastEnders viewers will no doubt rejoice that her lies are beginning to catch up with her.

And who better to act on her suspicions than Jean Slater, who recently got the all-clear herself – just days before the disease took the “love of her life” Daniel Cook.

In upcoming scenes, Jean will act on her suspicions when she confronts so-called friend Suki over a multitude of inaccuracies in her ‘treatment’.

Ever since Suki arrived in Walford, viewers have suspected she’s lying about having cancer.

In January, soap fans were introduced to Suki, mother of Kheerat, Jags, Vinny and Ash Panesar.

Cynical viewers predicted the newcomer was lying about her illness and suggested she was using it to manipulate her children.

Just days later, it became clear Suki WAS lying and using it as a tool to control her adult kids.

She was seen pumping Jean for information on her own cancer battle seemingly concerned for her.

However it soon became clear Suki was lying when she told her children about her own health woes.

They were word for word what she had convinced Jean to confide in her, and because of that her family swallowed her lies.

Next week, Suki’s lies begin to attract more and more attention – with her family and Jean suspecting something is seriously wrong.

The Panesar siblings are left with suspicions of their own about their mum’s illness, after she recently told them she’d been diagnosed with ovarian cancer.

Meanwhile, Jean is confused when Suki’s claims don’t seem to add up.

Suki states that she has two different doctors while also knowing very little about her apparent treatment.

Jean sees Suki’s dark side when she confronts her, and is issued with a warning…

Unable to contain herself, Jean publicly accuses Suki of lying about her cancer in front of her children in The Queen Vic.

While Suki’s family are horrified by the accusations, it’s clear that Kheerat and Ash think there might be some truth in Jean’s words.

Will Ash and Kheerat confront their mum? And will Jean regret causing trouble?

Do you have any sympathy for Suki? Leave us a comment on our Facebook page @EntertainmentDailyFix and let us know what you think!