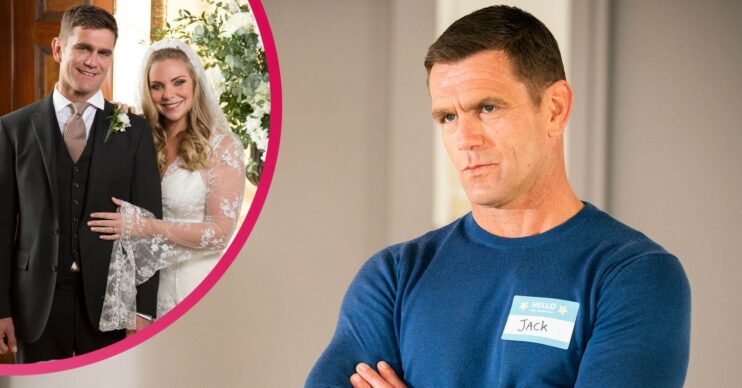 Who is Jack Branning in EastEnders? Was he really married to Sharon Watts?

The Walford copper comes with a lot of baggage, a couple of ex-wives - and several children!

Jack Branning in EastEnders is part of one of the show’s most iconic families.

He’s the son of Jim Branning, and brother to Carol Jackson, and Max, Suzy, Derek and April Branning.

Penny lives in France with her mother – Jack’s ex-wife Selina – and Amy and Ricky both live in Walford with Jack.

Who plays Jack Branning in EastEnders?

Jack Branning is played by actor Scott Maslen. He was a model who turned to acting and began his career with a part in the television series Lock, Stock….

Scott starred as DS Phil Hunter in The Bill for several years before landing the role of Jack in 2007.

Alongside his acting, Scott took part in Strictly Come Dancing in 2010, paired with pro dancer Natalie Lowe. And he also wowed the judges in Celebrity Masterchef.

Scott’s married to wife Estelle and they have a son called Zak.

One of his best friends is Samantha Womack, who played his on-screen love interest Ronnie Mitchell.

When Jack and Ronnie got together, Scott and Sam both worried it would be strange as they had been close friends for so many years they felt like brother and sister.

What happened between Jack and Ronnie?

Jack and Ronnie Mitchell got together soon after Jack’s arrival in Walford.

But it wasn’t plain sailign from the start, with former policeman Jack causing trouble with the Mitchells, and Ronnie struggling to bond with Jack’s daughter Penny.

When Jack had a drunken one-night stand with Ronnie’s sister Roxy, they both wanted to forget it but Roxy found out she was pregnant with daughter Amy.

After a brief romance with his ex-sister-in-law, Tanya, Jack got back together with Ronnie.

But it all fell apart when Ronnie found out Jack was Amy’s father – thanks to Suzy Branning hiding the DNA test results in a Christmas cracker!

Jack stood by Ronnie when she first found and then lost her daughter Danielle.

And Ronnie stuck with her man when she found out he was also the father of Sam Mitchell’s son Ricky.

When Ronnie found out she was pregnant, she was thrilled and she and Jack tied the knot.

Their baby, James, was born while Jack was away. He tragically died and a grief-stricken Ronnie swapped him for Kat and Alfie Moon’s newborn baby Tommy.

Ronnie went to prison for the baby-swap and she and Jack split.

But when Jack returned to Walford after some time away, the couple got back together and planned to move to Essex together.

Their story ended in tragedy when, on the evening of Jack and Ronnie’s second wedding, she drowned in the hotel swimming pool along with her sister Roxy.

Who else has Jack dated?

Jack had a romance with Chelsea Fox, that ended when Jack was shot and realised he still loved Ronnie.

He also had a one-night stand with Rainie Cross (now Rainie Highway) after Ronnie went to jail.

Later, Jack began a romance with Sharon Watts (then calling herself Sharon Rickman). He helped her through her painkiller addiction and the pair got engaged.

But after visiting Ronnie, Jack realised he didn’t love Sharon like he loved Ronnie, and jilted her.

Since Ronnie’s death, Jack’s been involved with Mel Owen, and he is now engaged to Denise Fox.

He’s helped her get to know her son Raymond and, although the pair split up for a while, they’re back together and seem happy – for now!

Is Jack Branning still a policeman in EastEnders?

Jack left the police before he came to Walford.

His daughter Penny had been run over by one of his contacts and left in a wheelchair and he couldn’t live with the guilt.

He turned his hand to business and ran the club for a while, dabbled in property development, had a share in the car lot, and owned the boxing gym.

But he has now returned to the police force and is Walford’s best crime fighter (sorry, Callum).

Does this mean Jack’s settling down and ready to enjoy family life with Denise and their blended family, as well as his steady job? We’re not convinced!