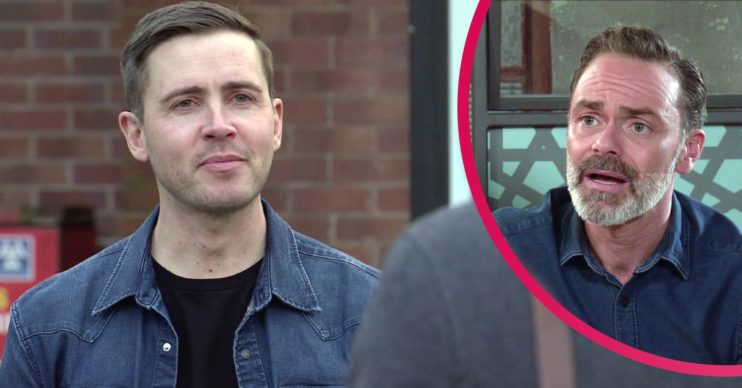 Is Todd leaving Coronation Street after Billy rejected him?

Todd admitted to Billy that he still loves him

In tonight’s scenes, Todd confided in his mum Eileen that he was considering taking a job in Bromsgrove in order to distance himself from Billy.

Meanwhile Billy questioned Paul on his night out. Later Eileen told Billy that because of him Todd is threatening to move away.

But Billy soon approached Todd, telling him not to leave because of him.

However Billy was shocked when Todd admitted he still loved him and said he’d stay if they could be together.

Summer was heartbroken to hear that Todd could be leaving again and begged Billy to make up his mind who he wants to be with.

Soon Paul told Billy that he met a guy the other night and it’s time to move on. Later, the vicar went to tell Todd he still has feelings for Paul and it’s probably best if he moved away.

Todd was left gutted by his ex-boyfriend’s words. But will he really leave Weatherfield again?

Later this week, Eileen tries to talk Todd into staying, but he admits Billy is the love of his life and if he can’t be with him, he has to leave.

Sarah is furious when Todd hands his notice in, leaving her in the lurch.

Meanwhile Paul admits to Daniel that he hasn’t really got a new boyfriend. He tells him it was all an act for Billy’s benefit. Daniel urges him to tell Billy how he really feels.

As Todd heads to the tram station, Paul spots Billy. Soon Paul admits to Billy that there is no new boyfriend and he still loves him and wants to try again.

What will Billy do?

It looks like Todd decides to stay on the street and he soon calls in at No.11 where Eileen is pleased to have him home. Todd admits to his mum that Sarah refused to give him his job at the factory back.

Read more: When is Coronation Street on this week? ITV has changed its schedule

Having been tipped off by Eileen, Todd calls in at the Undertakers hoping for a job.

While George takes a call, Todd uses the opportunity to unleash his sale techniques on an unsuspecting client and sells her the most expensive funeral plan.