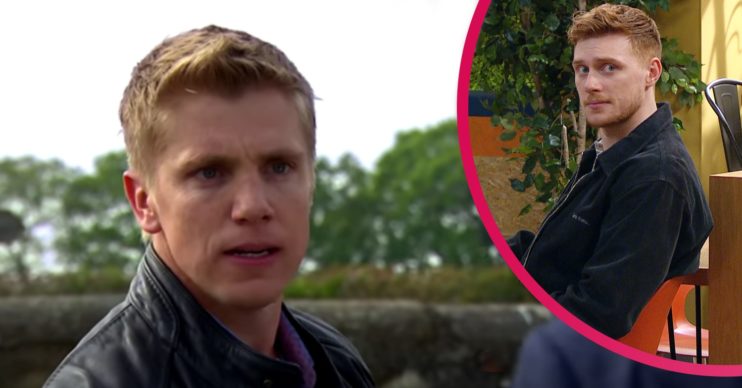 Is Robert Sugden returning to Emmerdale after Luke’s shock confession?

Robert is in prison

Emmerdale revealed a huge twist tonight about Robert and Lee Posner’s fight. But is Robert Sugden returning to Emmerdale after Luke’s confession?

This week, Ethan was horrified to find out Victoria’s boyfriend Luke had been catfishing him on a dating app.

In tonight’s episode of the soap (Friday, June 4) Wendy continued to question Luke about what happened with Ethan.

Emmerdale: Is Robert Sugden to return after Luke’s confession?

In the scenes, Luke explained what happened between him and Ethan’s friend Steven.

He revealed he got very close with Stephen and even wanted Wendy to meet him.

Luke told his mum that his brother Lee beat him up after discovering he was dating a man.

He told his mum about the terrifying moment Lee grabbed his throat and hit him in the stomach. Luke ended up pushing his brother, causing him to fall and smack his head on the step.

Lee fell unconscious but soon woke up and tried to attack Luke once again.

Before leaving he threatened to come back with his friends and beat up Luke.

In a shocking twist, Luke revealed that the next time he saw Lee he was in the hospital on life support, meaning Luke and Lee’s fight happened just hours before Robert hit Lee.

Wendy was horrified and realised that Robert hitting Lee might not be the reason he died.

Luke admitted he cut things off with Stephen in order to keep him safe.

Luke told Wendy to keep his secret or she’ll lose him too.

But what does this mean for Robert? Is there a chance he could return?

Whilst it hasn’t been revealed if Ryan Hawley will be returning to the role, there is always a chance in soapland that any character can return… even if they’re dead on occasion.

What happened between Robert and Lee?

In 2019, Victoria was raped by Lee Posner after a night out and later discovered she was pregnant with his child.

Lee denied raping Victoria and he and Wendy accused Victoria of being a liar.

Later Victoria’s brother Robert ended up attacking Lee by hitting him over the head with a shovel.

Later Lee died from his injuries and on the day Robert was sentenced to life in prison, Victoria discovered Luke was Lee’s brother.

Robert was given life with a fixed term of 14 years.

Last year Luke and Victoria began a relationship. But will Victoria find out Luke’s secret?

Will you be watching next week’s episodes of Emmerdale? Leave us a comment on our Facebook page @EntertainmentDailyFix and let us know.