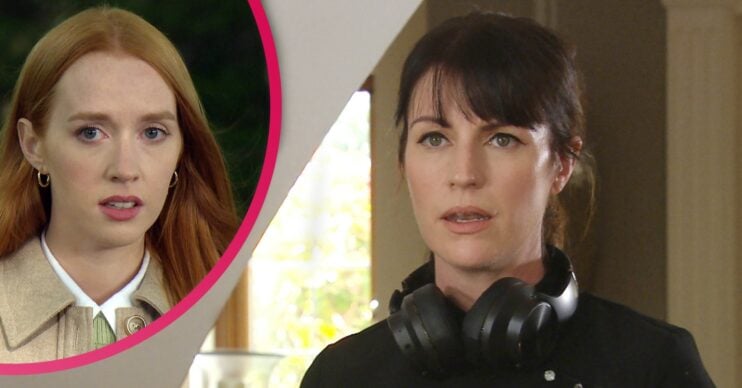 Is Kerry leaving Emmerdale already as she plots her exit?

Kerry recently returned to Emmerdale, but is she leaving already as she plots to get away from the village with Chloe Harris?

In tonight’s scenes (Friday, November 19) Kerry told her daughter Amy that she’s planning on leaving the village with her bosses daughter Chloe so she can be free of her controlling father.

She begged Amy to come with her, warning her Damon is dangerous and she’s not safe staying in the village.

Amy then thought Damon’s men could be behind the break in and later she was nearly run over by Damon’s employee, Lynden.

Despite the danger Amy refused to go with Kerry and Chloe, not wanting to leave her son Kyle behind.

But it seems as if Kerry and Chloe are still planning to flee.

It has not been revealed if Kerry and Chloe will be leaving or staying.

However with Lynden knowing they’re in the village, it looks like they won’t be safe there.

Where has Kerry been?

Last year, Kerry came off-screen and it was revealed she had left the village.

In real-life actress Laura Norton was pregnant and due to the coronavirus pandemic, she was unable to film.

Recently Kerry returned to screens and it was revealed she has been working for Chloe’s father, Damon.

However with Chloe’s mum and sister, Gemma, dying fairly recently and Damon in prison, Kerry has build up a friendship with Chloe and has been looking out for her.

Damon has demanded Chloe doesn’t have contact with Sarah, who received Gemma’s heart after she died.

But Chloe has grown frustrated with her father trying to stop her from living her life and this week she tried to run away with Noah Dingle.

Will Kerry really leave the village?