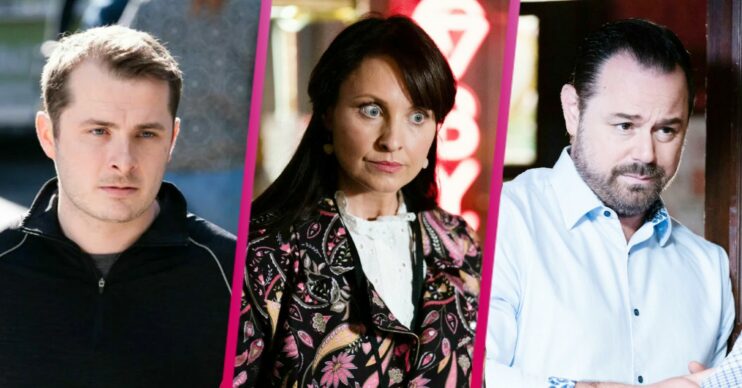 There are some changes coming to ITV and BBC this year

EastEnders has been on-screen since 1985, and lagging ratings, rumours of a new BBC soap and ITV’s schedule change all caused talk of the Walford drama being axed.

Former star Danniella Westbrook hit out at her old employer in February suggesting the show’s days were numbered.

And now, Masood Ahmed actor Nitin Ganatra has warned EastEnders might not be able to survive.

So, is EastEnders getting axed?

How is EastEnders doing in the ratings?

EastEnders took a hit over Christmas when it was revealed their ratings for Christmas Day were well behind other soaps.

Just 2.9 million people tuned in making it the third most-watched soap behind Corrie and Emmerdale.

After years of topping the charts on Christmas Day, 2021 saw it only just scraping into the top 10 most-watched shows.

Then in January 2022 it was announced that ITV would be changing their schedules starting in March.

Changes were made to other key programmes including the evening national and international news as well as the soaps, Emmerdale and Coronation Street.

The evening news programme was extended to an hour from 6.30pm to 7.30pm meaning the soaps moved to new schedule slots.

Coronation Street moved to hour-long episodes on Monday, Wednesday and Friday at 8pm.

The BBC then decided to shift EastEnders. The soap went from airing Mondays and Fridays at 8pm and Tuesdays and Thursdays at 7.30pm to Monday to Wednesday at 7.30pm everyday. This put it in direct competition with Emmerdale.

When the two went head to head on the first night, it was a win for Emmerdale which was watched by 4.2million viewers, with EastEnders behind on 2.6million.

Former EastEnders actress Danniella Westbrook, who played Sam Mitchell, says she thinks with Emmerdale moving to 7.30pm, it could mean ratings on other channels will drop.

On Twitter she praised Emmerdale, saying: “Meena on Emmerdale is brilliant. This is written so well. Can you even imagine the awards this is gonna win?”

She then added a further tweet questioning the future of EastEnders: “Can you imagine when they move Emmerdale to 7.30pm how much the ratings on other channels will drop through the floor… could be the end for Enders.”

Danniella recently hit out at her former show after her character was announced to be returning but with actress Kim Medcalf in the role.

She tweeted the BBC would be hearing from her legal team.

What did Nitin Ganatra say?

Now Nitin, who played Masood on and off between 2007 and 2019 has added his thoughts on the matter.

Speaking to PA after the Duke of Cambridge made him an OBE for services to acting on Tuesday May 17, Nitin revealed he thinks his former show must change to avoid the axe.

“I wouldn’t say just a producer or a writing team, I think the whole approach to storytelling will inevitably have to change.

“So I do hope they do survive another 40 years, I think they will.

“It is so much of the culture of this country, that I wish it to survive.”

Is EastEnders being axed?

A BBC boss spoke out about the future of EastEnders following ITV’s schedule shake up.

BBC Chief Tim Davie told the House of Commons’ Account Select Committee: “We’re not immune from competitive pressure, let’s be honest about it.

“And you may have a marginal impact or an impact during that hour, but we’re confident that the overall case for the EastEnders development remains strong.”

EastEnders axed in the US

Last month the BBC confirmed that EastEnders had been axed in the United States, even though episodes being shown were 10 years old.

In a statement sent to Metro.co.uk, the BBC said: “EastEnders episodes that have been carried by just a few public television stations in the US are over 10 years behind current episodes playing out in the UK, and unfortunately we are no longer able to make these older episodes available.”

Some fans also think the soap needs to come to an end.

EastEnders has been rubbish all Christmas, New year and now it continues to disappoint. Needs axing or some better drama in it where things actually progress for dramatic effect
#EastEnders

Meanwhile it has been revealed there are plans for BBC Three to launch a new soap.

As reported in Metro.co.uk, BBC Three controller Fiona Campbell said: “What would it look like? It could be somewhere very specific in modern Britain – Derry or Belfast, Aberdeen or Newcastle.

“I want to showcase a locality in all its glory. I’d like to provide a platform for the cast of the future.”

So what does this mean for the future of the BBC One flagship soap?

Could focus be shifted away from EastEnders and on to this new show? And would that be the end for EastEnders?