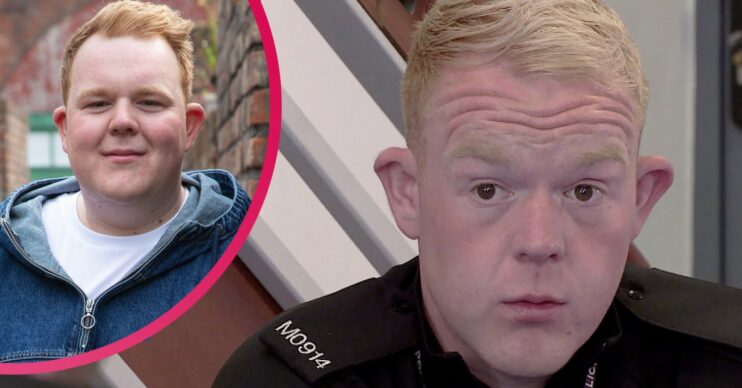 His career in the police may be over but will he head off to pastures new?

He’s been in Corrie for ten years, going from a schoolboy to a dedicated copper. And he’s been involved in some gripping stories from Bethany Platt‘s sexual exploitation to Craig’s battle with OCD.

So what’s Craig’s story? And is he sticking around in Weatherfield or moving on?

Craig came to Weatherfield back in 2012 as a teenager, with his mum Beth. His first major storyline was his involvement in Karl Monro’s campaign of terror in the street. Craig thought he had accidentally started the fire in the Rovers that killed Toni Griffiths and Sunita Alahan because he’d been having a sneaky cigarette.

But the truth was Karl – who Craig had seen while he was smoking – was to blame. When Craig spoke up about what he saw, Karl was arrested.

Craig and Faye are a cute couple now, but for a long time they were good mates. Craig was at Faye’s side when she got pregnant as a young teen, and gave birth to baby Miley.

He was also a great friend to Bethany Platt, who opened up to him about her rape at the hands of bent copper Neil Clifton. Craig Tinker’s loyalties to his fellow police officer were tested but he stood by Bethany.

Craig supported Bethany through her trial for assaulting a punter at the lapdancing club where she was working.

But he paid a heavy price for getting involved.

After the trial, Craig’s mental health began to suffer. He developed crippling OCD and struggled to keep going.

Thankfully, Bethany came to his aid, and with the help of therapy, Craig managed to get his life back on track.

What’s next for Craig?

Craig was enjoying life as Faye’s boyfriend, and the pair had moved in together. But when Faye and Emma hit elderly Ted with their car and covered up the crime, poor Craigy was put in an awful position.

In the end, he resigned from the police, saying he couldn’t live with the lies. But he loves his job so much, is this really the end?

As far as we know, Craig’s staying in Weatherfield for now. So we reckon his time with the police isn’t over yet – after all, who else would solve all the crimes on the cobbles?

Craig is played by actor Colson Smith. He was born in August 1998, making him 23 years old.

How did Craig Tinker lose weight?

Craig’s weight loss has been mentioned on screen and he’s often seen running around Weatherfield.

But of course it was alter ego Colson who lost the weight for real.

Back at the start of 2020, Colson decided to change his life. He started running and going to the gym and followed a healthy eating plan.

He’s lost a staggering amount of weight – thought to be around 10st – and he’s in great shape.

Last year, Colson documented his journey in a short film called Bored of Being the Fat Kid on YouTube.

He looks so different now and is a dedicated spokesperson for the positive effects of healthy eating and exercise.