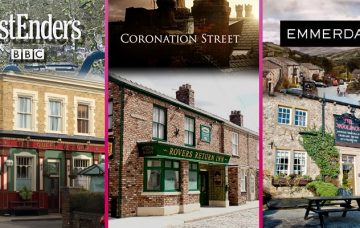 Inside Soap Awards 2018 – The Winners

Coronation Street won big at the Inside Soap Awards with eight prizes, including Best Soap.

Britain’s longest running soap proved it’s just as popular as ever on Monday night as it took home the whopping number of gongs at the annual awards ceremony held at 100 Wardour Street in London, with wins in both the Best Bad Boy and Best Bad Girl categories, as well as both Funniest Male and Funniest Female.

“It feels great to win an Inside Soap award. I’ve won two of these but this is great because, and I mean this sincerely, I think it’s been Coronation Street’s year.

“As great as the other shows have been, Coronation Street have really smashed it this year.

“I’ve nothing but gratitude. I came for three episodes and here we are all this time later.

“Now, no matter what, I’m one of those Corrie villains.”

Alongside Connor, Mollie Winnard’s Kayla Clifton won the female version of the Baddie award, whilst Simon Gregson was named Funniest Male for his work as Steve McDonald, and Dolly-Rose Campbell, who plays Gemma Winter, was given Funniest Female.

‘Corrie’s wins didn’t stop there either, as Jack P Shepard was handed Best Actor overall for his role as David Platt, whilst Shayne Ward – who played Aidan Connor – was recognised for having the Best Exit when he departed the show recently.

The soap also took home the gong for Best Shock Twist for Anna Windass’ dramatic return in which she put an end to Pat Phelan’s reign of terror by stabbing and killing him.

Elsewhere, Emmerdale’s Emma Atkins was given Best Actress for her role as Charity Dingle, and the gong for Best Partnership went to EastEnders married couple Mick and Linda Carter, played by Danny Dyer and Kellie Bright.

Did your favourites win an award? Leave us a comment on our Facebook page @EntertainmentDailyFix and let us know what you think.