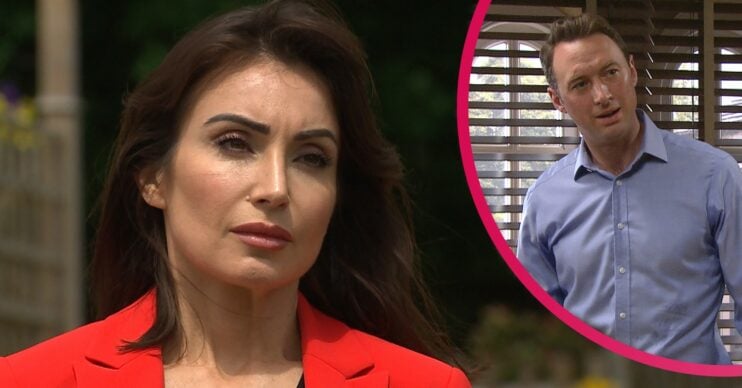 How many kids has Leyla Cavanagh got in Emmerdale? How many times has she been married?

Leyla Cavanagh in Emmerdale is played by Roxy Shahidi. She arrived in the village in 2008 clad in a PVC catsuit and immediately made her mark!

She left in 2011, but returned in 2014 and, apart from a brief absence while Roxy took maternity leave, Leyla’s been in the show ever since.

Leyla’s one of Emmerdale’s most unlucky-in-love residents with most of her romances ending in disaster – some more dramatic than others!

Leyla’s first romance in the village was with David Metcalfe. She fell for him hard, but ended up cheating on him with her boss, Nathan Wylde.

Creepy Nathan started to blackmail poor Leyla and manipulating her.

Fortunately she and David managed to deal with the dark times – for a while. But eventually things got complicated and they split up.

When Leyla’s mum died she went to the funeral, where she met up with sister Alicia Gallagher.

Leyla acted strangely around Alicia and her son Jacob, and even had several secret meetings with Alicia’s husband Justin – which caused boyfriend David to suspect she was cheating (again!).

Eventually it was revealed that Jacob was Leyla’s son. She’d got pregnant at 18 and given her baby to sister Alicia to bring up with her husband. In a second twist, it was later revealed that Alicia’s ex Justin was Jacob’s real dad.

Things were so complicated between Leyla, Alicia, Jacob and David that David said Leyla had to choose whether to be a mother. She left the village but kept in touch with her son.

Leyla came back to the village and went into business with Megan Macey, as a wedding planner. But things got tricky when she started an affair with Megan’s boyfriend Jai Sharma.

Later, Leyla began seeing Pete Barton and they got engaged. But their relationship ended in hilarious fashion when they both got cold feet on their wedding day!

Leyla had an important role in the dramatic Big Night Out episodes in 2019.

She, along with Tracy Metcalfe and Priya Kotecha, became protective of Jacob when it was revealed he had been groomed and abused by his teacher and David’s girlfriend Maya Stepney.

In the Big Night Out episodes, the three women attacked Maya and thought she had been killed. They worked together to cover up what they had done, but later found out she had escaped and was still alive.

For a while it looked like Leyla might have found happiness when she fell for handsome village doctor Liam Cavanagh.

They seemed made for each other, but their romance hit a hurdle when Liam’s daughter Leanna, and Gabby Thomas – daughter of Liam’s ex, Bernice – started to meddle. When Gabby falsely accused Liam of seducing her. Liam denied it, but Leyla wasn’t sure.

So even when Gabby admitted she’d made it up, their romance fell apart because Liam couldn’t believe Leyla would doubt him.

For a while, fans thought Leyla might get back together with David Metcalfe but he is currently romancing Meena Jutla.

Her marriage to Liam

Earlier this year, Liam and Leyla got married. However just a few weeks after their wedding, Liam’s daughter Leanna died.

Leanna was murdered by Meena after she discovered Meena killed her best friend Nadine, however the police ruled her death as an accident.

Currently Leyla has just discovered she is pregnant with Liam’s baby. How will he react to the news?

Who do you think Leyla should be with? Leave us a comment on our Facebook page @EntertainmentDailyFix and let us know what you think