Where can you see all episodes of Emmerdale and can you watch them in advance?

Emmerdale fans can’t get enough of their favourite soap, but what about if they miss it? How can they do an Emmerdale catch up?

Is there an omnibus? Or do we have to catch up online?

And how about classic eps? Is there a way to watch those?

Where can you catch up on this week’s Emmerdale?

Emmerdale is available to watch after the episodes have aired on ITV Hub.

The streaming service allows you to watch anything you’ve missed – or re-watch those you’ve loved.

The episodes go back a month, so you’ve got plenty of time to catch up.

Is there an Emmerdale omnibus?

Yes! Emmerdale airs its whole week’s worth of episodes at 6am on a Sunday morning on ITV3.

And if you’re keen to watch Classic Emmerdale episodes, they also show on ITV3 every day!

Currently the action is centred around 2001 with Kathy Glover‘s exit airing soon.

Is Emmerdale on BritBox or Netflix?

They have classic episodes for you to view as well as one series of Emmerdale Family Tree.

In certain regions, current Emmerdale – along with Coronation Street, EastEnders and Casualty – is available to stream.

New episodes of Emmerdale arrive on BritBox every day Monday to Friday.

Emmerdale began in 1972 and focused on telling the story of the Sugden family and their farm.

In fact, back then, the show was named Emmerdale Farm after the business at the heart of the soap, and the village location was called Beckindale.

But where do you go to watch older episodes? Is it possible to catch Emmerdale Farm from its very earliest days?

Emmerdale began as a farming soap – similar to BBC radio’s The Archers. And it also took inspiration from an Irish soap opera called The Riordans, which was mostly filmed outdoors – unusual for soaps at the time.

The show was created by Kevin Laffan for Yorkshire Television and was originally shown in the afternoons.

In 1978 it moved to the evening, and in the eighties it became a year-round show when its regular filming breaks stopped.

Emmerdale was groundbreaking because its exterior scenes were filmed in real-life locations around Yorkshire, before moving to a purpose-built exterior set on the Harewood Estate in 1998.

Where can you watch classic Emmerdale?

If it’s the first episode of Emmerdale Farm you’re after, you can find it on YouTube.

It begins with Jacob Sugden’s funeral and the return of his son Jack Sugden after many years away from the farm.

Jack – played by Andrew Burt originally, then by Clive Hornby – was in the show for many years.

And if that first episode whets your appetite, you can buy DVD boxsets of the early years. Each DVD covers a whole year’s worth of episodes from 1972 right up to more recent years, though some of the years are more difficult to track down online than others.

If it’s drama you’re after, you might want to pick up the DVD for 1993. That was the year that saw the infamous Beckindale plane crash.

In dramatic scenes, a plane crashed into the village, killing four residents, and leaving Chris Tate in a wheelchair.

The episode was watched by 18 million viewers and really put the show on the map. Shortly after the crash, the village was renamed Emmerdale.

The Tates featured in many memorable moments from the 1990s. In 1997, Kim Tate left husband Frank to die. And in 1999, nearly 15 million viewers watched Kim depart in a helicopter with baby James.

How can I watch Classic Emmerdale on television?

You can catch classic Emmerdale episodes every day on ITV3. There is an episode at 1.45pm every day and another half an hour later at 2.15pm.

The classic episodes from the last month are also available on ITVHub. 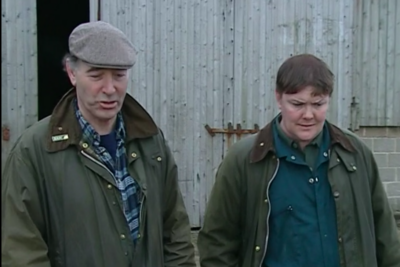 Paddy and Jack are among the familiar faces in classic Emmerdale (Credit: ITV)There are lots of familiar faces in the episodes currently airing on ITV3. Paddy Dingle – then Paddy Kirk – is looking after the village’s animals, while Charity Dingle is causing trouble.

And Jack Sugden – played at this point by Clive Hornby – is still at the heart of the show, just like in that first episode back in 1973.

Can I watch Emmerdale in advance?

Unfortunately some things are kept top secret until they air on television, and Emmerdale episodes are on of those things!

Unlike fellow soap Hollyoaks, who uploads that day’s episode every morning to All4 so fans can stream and watch whenever they like, Emmerdale does not go online until after it has aired.

The soap often air teaser trailers and clips on their YouTube channel and sometimes on the ITV website too.

But if it’s full episodes you’re after, you’ll just have to wait until 7.30pm every week night!