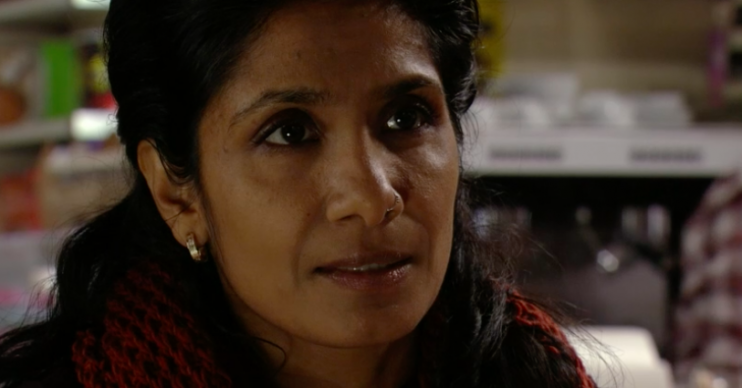 What is the Panesar matriarch capable of?

Viewers of EastEnders have been left fearing for Iqra Ahmed’s life, after Suki Panesar appeared to make a threat against her.

The Panesar matriarch has not long arrived in Albert Square, but viewers already think the worst of her after suspecting she’s lying to her family about having cancer.

Now fans of the BBC soap suspect she could be capable of murder, after she met her daughter Ash’s girlfriend Iqra for the first time.

Iqra will have to go… Does that mean an honour killing storyline is pending on EastEnders?

On Tuesday (February 4), Iqra was introduced to overbearing mum Suki at her birthday dinner, not realising she was walking into a snake pit.

Although Suki was polite(ish) to Iqra’s face, the shady character later made it clear she did not approve of the match.

As soon as Ash and Iqra had left, Suki told her sons: “She seems like a nice girl, a shame her and Ash won’t last. Some differences just can’t be overcome, so Iqra will have to go.”

Fans immediately sense a sinister foreboding in her words, believing the disapproving parent is capable of killing her daughter’s girlfriend.

Some even feared the soap might be about to set up an honour killing storyline.

We know that the Panesar family are of Punjabi Sikh heritage, while Iqra is Muslim.

One wrote: “Iqra will have to go… Huh, does that mean an honour killing storyline is pending on EastEnders?”

Another said: “Suki looks like she could kill. I’m off to protect Iqra and Ash. #EastEnders.”

A third added: “Suki better not plan anything for Iqra.”

Many others called Suki “evil”, “manipulative” and a “cow”.

Suki looks like she could kill. I’m off to protect Iqra and Ash. #EastEnders

#EastEnders if suki don't like iqra, then she gon get beat

Suki better not plan anything for Iqra #EastEnders

Who does Suki think she is? Ma Baker? #EastEnders

On Digital Spy Forums, one fan wrote: “Does Suki want to kill Iqra? What did she mean by ‘Iqra will have to go?’ She said this line so decisively after realising that Iqra and Ash were not going to break up and so the only way to split them up was by getting rid of Ash via murder.

“Her sons looked at her in dread as if they already knew what she meant. Like they have possibly killed before?”

Another said: “Maybe they will explore an honour killing storyline judging on the behaviour of Suki. I see it as a possibility. If she can fake a cancer, she has no limits.”

“Maybe Kate Oates wants Suki Panesar to be like Kim Tate as it has been a while since we had a female villain,” suggested another.

Will there be more bloodshed in Albert Square? We know at least one character will be killed off in a dramatic boat stunt later this month.

Do you think Suki is capable of killing? Leave us a comment on our Facebook page @EntertainmentDailyFix and let us know what you think!