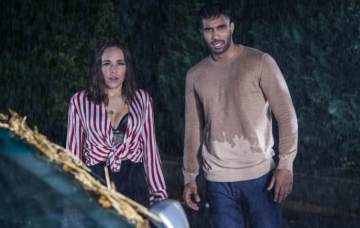 But will Sinead live to regret making such a dangerous enemy?

Sinead O’Connor blows into Hollyoaks in tonight’s E4 episode. She’ll be back to her old ways almost immediately, sharing a steamy romp with Sami as they shelter from the storm.

But explosive though her return is, it seems things aren’t about to get any calmer for Sinead because she’s got all sorts of drama happening in the weeks ahead as she settles back into the Village.

Of course Sinead’s got some scores to settle with old frenemies in Hollyoaks, returning to ruin Ste and Harry’s wedding (they don’t need much help there!). But top of her hit list is Sienna Blake.

The two Oaks divas haven’t crossed paths much in the past, but according to Stephanie Davis, who plays sassy Sinead, they’re about to go toe to toe.

“Who should be most scared of Sinead?” Stephanie teased at a recent Hollyoaks press event. “I would say Sienna.”

Sinister Sienna is back in the Village after being released from prison, but could Sinead be biting off more than she can chew if she takes on murderous Ms Blake?

Stephanie said that the feud was a bit further down the line for Sinead, and she was keeping tight-lipped about exactly how or why the feisty females would end up facing off.

But in the meantime, Sinead’s going to be kept busy introducing husband Laurie – played by former Home and Away star Kyle Pryor – to Hollyoaks Village.

But obviously despite having a hunky husband at home, Sinead’s been cheating. Will her dalliance during the storm stay a secret? Unlikely!

“She’s been getting it on with Sami,” Steph laughed. “And it all kicks off.”

So it seems Sinead’s not changed much in the time she’s been away.

“There’s a lot to her,” said Steph. “She’s trying her hardest to be this new wife, but there’s still this fire inside her. I think you’ll see more of that when Laurie arrives. He’s great. There’s a great dynamic between them.”

Are you pleased to see Sinead back in Hollyoaks? Let us know by commenting on our Facebook page @EntertainmentDailyFix!