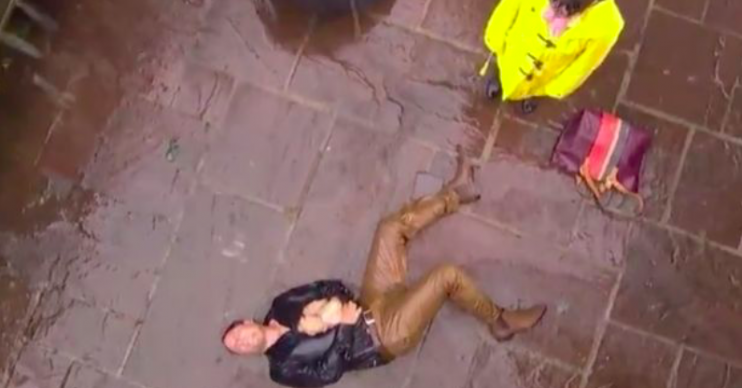 She stabbed him in the stomach

Hollyoaks serial killer Breda McQueen killed again last night, and fans were horrified with the identity of her latest victim.

Long standing character Tony Hutchinson appeared to be killed off after 24 years on the E4 soap.

On Wednesday night (August 28), murderous Breda stabbed Tony after he discovered she was responsible for the deaths of several Hollyoaks residents.

Viewers know that Breda has been ‘cleansing’ the Chester village of those she believes are sinners, especially men who she deems are bad dads.

Several characters have paid the price as a result – including Russ Owen, Carl Costello, Louis Loveday and Mac Nightingale.

But, when Tony confronted her after realising her crimes, she claimed to be “helping rid the world of useless, reprobate dads”.

After an emotional exchange in the rain, granny Breda stabbed Tony in the stomach to save her own skin, whispering in his ear: “You really were one of the good ones.”

Viewers were then left in bits to see a montage of Tony’s time in the soap, as his life flashed before his eyes, including a visit from his late son Harry.

New dad Harry was also murdered by Breda, when he tried to go on the run after a warrant was issued for his arrest.

Fans were mortified with the apparent murder of Tony, with some threatening to boycott the soap and claiming the show “would not be the same again without Tony” (Nick Pickard).

One wrote: “No way did they just kill Tony Hutchinson!”

Another added: “If Hollyoaks have just killed off Tony Hutchinson, I will never recover.”

Hollyoaks just won’t be the same without Tony Hutchinson! #hollyoaks

No way did they just kill #tonyhutchinson @Hollyoaks 😭😭😭😭

Not happy at all. He should have been the one to kill Breda 🤬🤬 hollyoaks fan for years….. fuming

Come on now @Hollyoaks that was cruel 😢😪😪 #TonyHutchinson

If Tony dies, we riot. #Hollyoaks

IF THEY KILL OFF TONY IM GONA LOSE IT 😩😩😩 #hollyoaks

“If Tony dies, we riot,” added one more, while another said: “Hollyoaks is offically cancelled for me if Tony has been killed off.”

Others said the storyline was “cruel”, “shocking” and “heartbreaking”.

Some refused to believe he was actually dead… So have Hollyoaks really just killed off Tony, who first appeared on the soap in 1995?

We know Joe McGann has been cast as Tony’s father Edward, who’ll be a new supervillain in the soap.

Could he arrive at Tony’s funeral? Or is there another twist in store for fans!?

Do you think Tony Hutchinson is really dead? Leave us a comment on our Facebook page @EntertainmentDailyFix and let us know what you think!