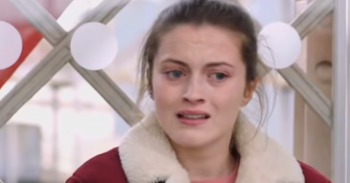 The 25-year-old actress – who plays Yasmine Maalik in the Channel 4 soap – has praised the 22-year-old star, who bowed out of the show in last night’s (10.04.19) E4 episode when her character Lily McQueen died of sepsis, as a “talented soul” following her ‘Oaks exit.

Sharing a picture of herself, Lauren and Ruby O’Donnell (Peri Lomax) on Twitter, she wrote: “I know we look emotional here because we couldn’t stop crying… This was our last day filming a Lily, Yazz and Peri scene, and Lauren’s last scene on @Hollyoaks

“@Lauren_McQueen it has been a blessing to work with you. You are such a beautiful talented soul and a true friend (sic)”

He wrote: “I am SOBBING at tonight’s E4 @Hollyoaks. Outstanding performances from my lovely on-screen family. @Lauren_McQueen – you, my girl, are an absolute star. Keep shining bright. Miss you lots. X (sic)”

I am SOBBING at tonight’s E4 @Hollyoaks. Outstanding performances from my lovely on-screen family. @Lauren_McQueen – you, my girl, are an absolute star. Keep shining bright. Miss you lots. X pic.twitter.com/v2WkCZVpBC

After Lily bowed out of the Hollyoaks village, Lauren thanked the soap for handing her such an important sepsis plot as her last storyline.

She wrote on Instagram: “Lily McQueen will be forever in my heart! Thank you so so much for everyone’s support & messages on my last episode. I feel so lucky to have been apart of @hollyoaksofficial I love that they aren’t afraid to confront challenging issues like Lily’s self harm & sepsis. They tackled it beautifully and I can’t thank them enough for nominating me for Best Actress at this year’s @thebritishsoapawards Here’s a few pics with some of the best people I worked with on my very last scenes and our amazing director Patrick Harkins! RIP #lilymcqueen (sic)”

Earlier this month, Lauren admitted she was “really shocked” to find out she was being killed off in Hollyoaks.

She said: “I was really shocked, to be honest.

“Lily’s been through so much, and everyone just wants her to have a happy ending. That would have been the easy way to go out of the show, though – I knew this story would be challenging for me, and I wanted to do it justice.

“I’ve got a friend who has recovered from sepsis twice, so she really helped me to understand how it affected her, and gave me a detailed response of how she felt at the time.

“That really helped with the physical side of it”.

What did you think of Lily’s devastating exit? Leave us a comment on our Facebook page @EntertainmentDailyFix and let us know.