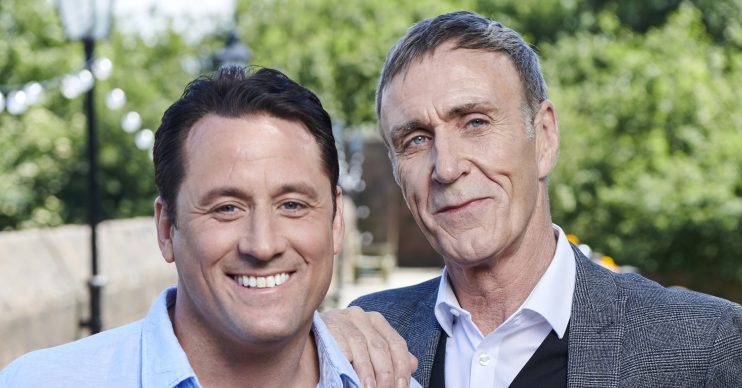 And it turns out he’s not a very nice person at all.

The soap has confirmed Edward Hutchinson is set to be the show’s new super villain.

Read more: Channel 4 hits out at claims Hollyoaks could be axed

“He’s a highly manipulative and narcissistic surgeon who has only his best interests at heart.

“The height of his villainy will build to a huge story running across the anniversary and beyond.”

Joe said: “I’m coming in to play Edward Hutchinson, a surgeon who is going to rustle some feathers around here. I’m looking forward to that.

“I’m looking forward very much to joining in with this very good team, the current Soap Champions!”

“25 years of Tony in Hollyoaks and finally we found out where his dad’s come from. It’s a blessing to be asked to do this, stepping into such a good team with such good characters.”

Nick Pickard said: “Hollyoaks has been around for nearly twenty-five years, and I have been there for every single one of them.

Yesterday, I had the pleasure of meeting Joe McGann who is coming in to play Tony’s dad, Edward.”

“In 2020 we celebrate our 25th anniversary, so what better way than by getting to know some more of Tony’s family?

“I have to warn you though, Edward is definitely here to ruffle a few feathers! Here’s to the next twenty-five years!”

Joe is perhaps best known as star of 90s sitcom The Upper Hand.

Joe will appear on screen in the autumn, and Hollyoaks executive producer Bryan Kirkwood is “thrilled” to have the former Night and Day actor on-board to bring the “huge character” to life.

He said: “Tony Hutchinson, played by the hugely talented Nick Pickard, has been at the heart of Hollyoaks since it began.

“He is estranged from his father and we felt that as we approach Hollyoaks’ 25th anniversary next year it is time to learn more about our biggest character.

“He is now happily settled into married life with Diane – in fact he’s never needed a father figure less.

“But in autumn events will bring Edward Hutchinson to Hollyoaks village and we can’t wait to see the phenomenal Joe McGann bring this huge character to life.

“I’m thrilled to welcome him to the cast.”

Stephen is no stranger to Soapland, having appeared as Sean Reynolds in Emmerdale from 1999 to 2002, David Hargreaves in Brookside in 1985, and in 2006 he starred as Bernard Stephenson in Doctors.

Joe starred as housekeeper Charlie Burrows in ITV sitcom The Upper Hand from 1990 to 1996.

Are you excited about Joe joining Hollyoaks? Leave us a comment on our Facebook page @EntertainmentDailyFix and let us know what you think!