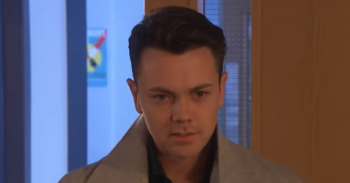 Hollyoaks will air a special far-right extremist episode next week

The episode will air next week!

Hollyoaks is to air a special far-right extremist episode, which will mark the debut of newcomer Alex Williams.

Alex said: “I’m really excited to be joining Hollyoaks, especially for such an important storyline, which I’m personally really keen to tell.

“Cast and crew have welcomed me into the Hollyoaks family and working alongside Kieron and Ray has been great because there has been a strong togetherness between us, which really helped with my hard-hitting first scenes.

“I can’t wait to work with them and more of the cast as the storyline progresses.”

Shahid will end up on the wrong side of Jonny and his gang when he asks them to move their car, which is blocking his bike, but they launch a violent, unprovoked attack on him in the boozer’s car park.

The character will return in future episodes as the far-right plot unfolds.

Jayshree Patel, who co-wrote the episode, said: “The devastating impact of racism on people’s lives is a well-documented story that has appeared on screens for many years.

“Many people dismiss radicalised young men as unintelligent or uneducated and therefore ignorable, but this doesn’t help us to understand where feelings of marginalisation come from in the first place.

“These angry young men are the product of a world that has pushed them to the fringes of society, to me they are the lost boys. As a teacher, I’m passionate about these lost boys.

“This is unashamedly, Ste’s story. A tale of how a decent white working-class young man with strong family values, can be lured into the murky world of organised racism.

“We’re trying to create an understanding of how and why this journey occurs and ultimately we hope that through this story we can encourage dialogue to bring about change.”

Executive producer Bryan Kirkwood hopes the storyline will “engage people” in an issue they may not have previously experienced.

He said: “The more we learned about how these groups operate and how insidious they are the more passionate we became about telling this story.

“This is a story about how hate and fear destroys communities.

“It is also a timely story about protecting young people online, making them question information, understand the echo chamber of the internet and the algorithms that can lead people, in this case our much-loved but troubled character Ste, down a rabbit hole into a terrifying world.

“We have a proud history of exploring hard-hitting issues like self-harm and sexual abuse at 6.30pm and in the same way we hope to engage people in an issue they not have previously experienced without alienating them.”