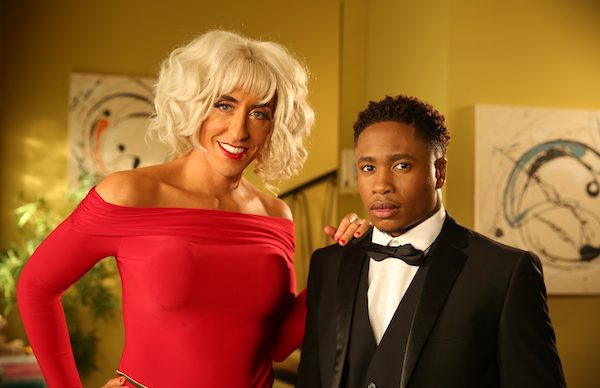 Mitchell is currently in a relationship with Cleo, but is cheating on her with Scott

Fans of Hollyoaks have been left ‘confused’ by Mitchell Deveraux and Scott Drinkwell’s storyline.

Recently viewers have seen Mitchell, who is in a relationship with Cleo McQueen, struggle with his feelings for Scott and his drag alter ego Anita Tinkle.

Over the last few weeks, the doctor has made a move on Anita and made it clear he has feelings for him.

Last week, Mitchell slept with Scott, who was dressed as Anita, but at the time they were together, he was meant to be seeing his grandfather Walter.

Walter unfortunately had a stroke and Mitchell’s family struggled to get hold of Mitchell to tell him what had happened.

When he found out about his grandfather, he lashed out at Scott and set fire to his Anita wig in a sink.

But in last night’s episode (October 14 2019), Mitchell became jealous when a man began flirting with Anita (Scott) after his show at Mercedes’ birthday party.

So does Mitchell only like Scott when he’s dressed as Anita?

He went onto apologise to Scott for his actions and the pair ended up kissing again.

The storyline has left some viewers confused and they aren’t sure if Mitchell is only attracted to Scott when he’s dressed as Anita.

idk about any of you but this mitchell/scott storyline is so confusing it doesn’t make sense at all mitchell isn’t willing to accept or come to terms with who he is tbqh i don’t even know whether he’s bi/gay it just doesn’t make sense. #hollyoaks

There it is Mitchell wants Anita not Scott. There is a distinct difference between the two. #Hollyoaks

So does Mitchell only like Scott when he's dressed as Anita? #Hollyoaks

Tonight’s E4 episode sees Scott and Mitchell make a decision about their future together.

We suspect someone’s heart will end up broken…