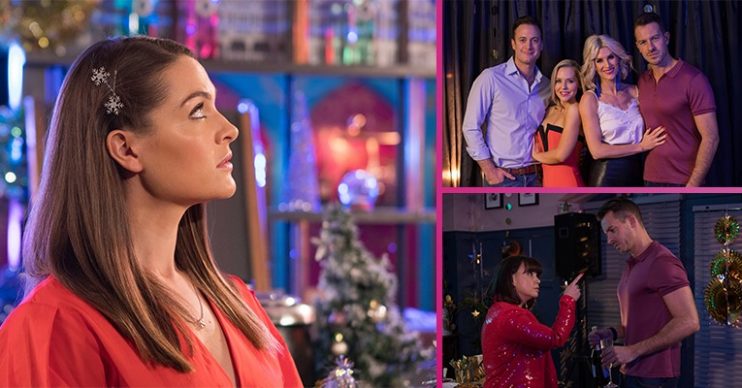 Is Sienna onto the truth? And who gets stabbed at New Year?

It’s a huge Christmas and New Year in Hollyoaks as Liberty discovers she’s pregnant, but Sienna could be onto the truth, Nancy makes a confession, and there’s hints of a horrifying stabbing as the show flashes forward to 2020.

It’s Christmas Eve in the Dog and Liberty is getting into the festive spirit.

But not too much, as by Christmas Day she’s ready to tell Sienna she’s pregnant.

Of course, Sienna believes Liberty to be carrying HER baby as a surrogate, but viewers know Liberty slept with Brody as Sienna’s last embryo wasn’t viable…

Thrilled with the baby news and even opening her arms to welcome Maxine and Minnie back into her life, Sienna’s day is topped off when she receives her dream doll’s house as a gift.

But she has bought Brody a drone and when she gives it a test run in the village, it gets stuck in some bunting.

As it points to the window of her flat, will the drone record something incriminating?

Could Liberty and Brody’s big secret come spilling out?

3. Nana gets into the Christmas spirit

Nana is back from Spain and wants to get the village in the Christmas spirit at The Dog Christmas party.

She leads a conga line and decides to build the McQueen family back up after a difficult year.

Darren is annoyed when he receives an application for divorce from Nancy.

He goes to confront her, but they’re interrupted by Kyle.

With Nancy deciding to throw a New Year’s Eve party at The Hutch, Darren later goes to see her again.

He tells her he wants her back, but how will she respond?

Nancy is ready to party with her ‘Parents who party’ group at The Hutch.

But in a special flash-forward episode, that sees the action go back and forth between 31 December 2019 and 31 December 2020, we see the new year isn’t as good as everyone had hoped…

New Year’s Eve 2020 sees the police at the Osbornes’ with Nancy shouting up to Charlie, asking what he’s done.

Back in the present Juliet feels pressured to sleep with Sid, but what do the 2020 scenes hold for them?

Tom is celebrating his birthday in 2019, and he cuts his cake with a distinctive knife.

In 2020, that knife is seen being put into an evidence back – has it been used in a crime?

Has someone been stabbed with the knife? And is Tom involved somehow?

Elsewhere, Sid’s cousin Jordan arrives with drugs in the present, but Luke arrive and convinces Sid to make 2020 a positive one.

As Sid admits he likes to play the guitar, the flash-forward to 2020 sees Leela, dressed as if she’s been to a wedding, look at a violently smashed guitar on the floor of The Dog carpark…

When Mandy interrupts Cindy being mean about Nancy and tells her to give Nancy a break, Nancy overhears.

Feeling terrible about what’s happened with Darren, Nancy, not wanting to live a lie, confesses everything to Mandy.

How will Mandy react to the news Nancy slept with Darren?

With everything still up in the air following Nancy’s confession, Mandy heads off with Leela to a New Year’s Day party at The Loft.

Meanwhile, Sid and Juliet also head to the club after getting hold of some drugs.

Juliet clashes with Mandy when the teen tries to take Mandy’s drink and, angered, Juliet decides to spike Mandy with drugs…

After a brief return this week on screen, John Paul comes back to Hollyoaks for good at the beginning of January.

Mercedes is pleased to have her brother back by her side, but will he make 2020 a good one for her and the McQueen clan?