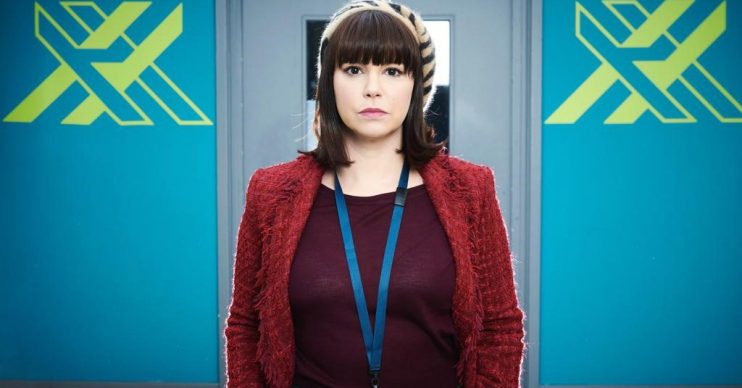 And Warren Fox returns madder than ever...

Teacher Nancy Osborne is STABBED in dramatic Hollyoaks scenes to be aired later this year.

In an explosive trailer unveiled by the E4 soap today (January 2), the heritage character – played by Jess Fox – is stabbed during a violent altercation at Hollyoaks High.

In tense scenes at the school, Nancy is seen running to intercept a fight between three male students on the playground.

As she shouts “stop it” and “break it up” and tries to pull the young men apart, she is then seen collapsing to the ground.

Rushing to her aid, returning teacher John Paul McQueen crouches over her as the culprits and other students look on in horror.

At the centre of the drama, and possibly even the person partly responsible for Nancy’s stabbing, is new character Jordan Price.

The drug dealer, played by Connor Calland, sets out to cause trouble for the teens of Hollyoaks High as he plans to recruit his cousin, Sid Sumner, and Juliet Quinn as the County Lines storyline heats up.

Viewers know that County Lines is a term used when drug gangs from big cities expand their operations to smaller towns, exploiting children and vulnerable people.

Over the course of the coming year, Hollyoaks characters Juliet, Charlie, Sid and Ella will be groomed to carry out criminal activities – and Nancy’s stabbing is just the beginning.

In the dramatic preview of upcoming events, we also see the return of Jamie Lomas as Warren Fox – who appears to be as menacing as ever.

In uncomfortable scenes, he kidnaps Sienna’s new boyfriend, Brody Hudson. But a vengeful Sienna is out for blood, telling us: “I’m going to take back my children and show Warren Fox what it feels like to lose everything.”

Meanwhile, returning John Paul confronts serial killer Breda McQueen and shares a kiss with old flame James Nightingale – as but what does this mean for Liam and James?

The trailer also shows Mitchell coming out as gay to his mum Martine, new couple Toby and Celeste determined to get revenge on the Deveraux family, and Lucy-Jo Hudson reprise her role as troubled Donna-Marie.

We also see a sneak peek of Darren breaking down as his depression storyline begins, and Jesse overhearing James and Grace admitting to shooting Mercedes…

We’ll get the popcorn in, it’s going to be huge!

Let’s start the new year off with a BANG! 💥💥💥😱😱😱 Check out what's coming your way this new year in #Hollyoaks… 😲 #HollyoaksNewYearTrailer #HollyoaksLater pic.twitter.com/6kOk7JUrEv

Which storyline are you most excited to see play out? Leave us a comment on our Facebook page @EntertainmentDailyFix and let us know what you think!