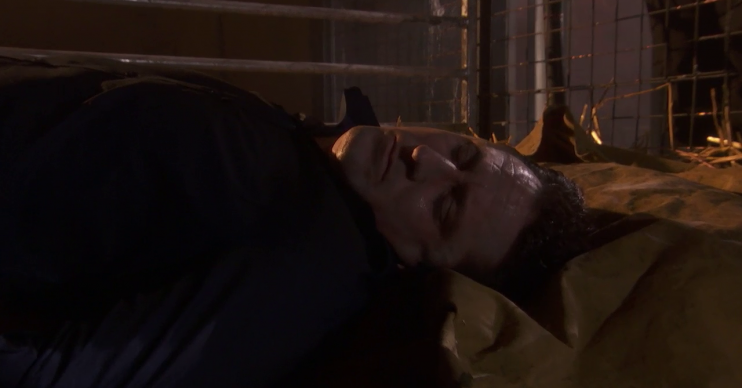 It has been confirmed that Tony Hutchinson is alive in Hollyoaks.

Tony, who appeared to be killed off by serial killer Breda last week, was revealed to be alive in last night’s (September 2 2019) E4 first look.

The Hollyoaks legend is being held at Breda’s pig farm “Stone Mount Farm”.

In the first look Tony didn’t appear to open his eyes but Breda said to her victim: “How’s my little miracle today?”

As far as Tony’s wife Diane is concerned, Tony is dead to her after Breda lied and told her Tony had been having an affair and left the village with his other woman.

Earlier in the summer, Breda killed off Tony’s son Harry after he planned to leave his son Isaac behind.

Harry missed his plea hearing after being drugged by boyfriend James.

Sadie, who had just given birth to Harry’s baby, thought Harry had done a runner and a furious Breda went after him.

Tony was suspicious after he received a text from Harry’s phone, which Harry included emojis – which he never used.

The net has been starting to close in on Breda with Louis Loveday’s body being found in the river.

Tony realised all the kids with missing dads had been given the same teddy bear by her.

When he rang Harry’s phone in Breda’s presence, he realised she had it. She stabbed him!

Fans are thrilled the soap legend hasn’t been killed off.

When your detective TV viewing ass knew there would be twist…. Yes Tony #Hollyoaks pic.twitter.com/knkNYP8WMd

The moment we all just found out Tony is alive! 😁#tonyisalive #hollyoaks pic.twitter.com/XLXePswlSv

Are you happy Tony is alive? Leave us a comment on our Facebook page @EntertainmentDailyFix and let us know what you think!