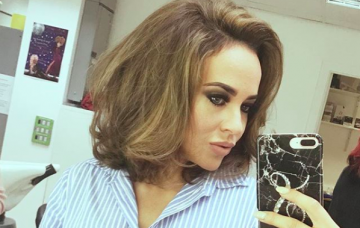 Stephanie Davis’ return to Hollyoaks is going to be a dramatic affair.

The actress will make her comeback as Sinead O’Connor just in time for her ex-boyfriend Ste Hay’s wedding to Harry Thompson – and it will be stormy.

Sinead’s return will coincide with a huge storm hitting the village, lasting the full week.

Destruction and drama will rain down over the villagers in a first for the soap.

“Our stories of the year are all peaking brilliantly across the week, under the black skies of the storm, so it’s a fantastic treat for the audience.

“Secrets that the viewers have been desperate to be revealed are blown all over the shop.

“We have revelations, there are departures and there’s a fantastic return from the past in the form of Sinead.”

In May, the 25-year-old revealed that she would be reprising her role on the Channel 4 programme, showing off a Hollyoaks script in a post on Instagram.

In the caption, Steph simply wrote: “She’s back.”

She previously teased her comeback, saying: “I’m over the moon to be given this amazing opportunity and so excited to bring feisty Sinead back to Hollyoaks.

“I can’t wait to see all the cast and crew there, many that I have known for years.

“I just want to get stuck into learning my first scripts I can’t wait to be on set and back acting again, which is my passion.”

Sinead’s return will see her clash with ex Ste and see the return of their shared daughter Hannah.

Are you excited for Steph’s return as Sinead? Leave us a comment on our Facebook page @EntertainmentDailyFix and let us know what you think.