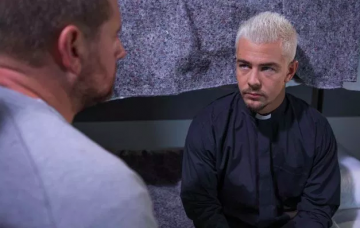 He confronts the monster in his cell - but will he kill him?

Joel Dexter is set to pay a visit to paedophile Pete Buchanan in Hollyoaks in upcoming scenes which see Joel head to prison.

Following Cleo McQueen receiving a book congratulating her on her upcoming wedding, Joel decides to pose as a visiting vicar and manages to get access to Pete’s cell.

The book tips poor Cleo – who fans know is already battling bulimia – over the edge and Joel is filled with murderous rage towards Pete, who is in prison for abusing Cleo when she was younger.

Posing as a vicar visiting prisoners, Joel comes face to face with Pete in his cell. But will he kill him for the torment he’s put Cleo through?

Speaking to Metro.co.uk, Rory Douglas-Speed who plays Joel revealed: “Pete is a terrifying character and quickly changes his feeling sorry for himself act, by ramping up the pressure.

“After hearing so much about him over the past couple of years, it was quite an anticipated meeting between both of the characters, which I’m sure the audience will find thrilling.”

He continued: “Joel personally believes that Pete is at the centre of all of Cleo’s issues. That’s why he’s visiting him in the first place. You’ll have to wait and see what happens next week, but the audience will love and hate it all at the same time.

“I really enjoyed working with Kai (Owen), and I learned so much from him. A genuinely lovely man, fantastic actor, and all round good guy!”

Kai Owen who plays Pete added: “When Pete discovers it’s Cleo’s fiancé, he immediately thinks of Cleo and his mind begins to work overtime. Who is this man? What does he want? Is he a direct threat?

“Pete is a very dark and manipulating character. Those are his default settings, so when Joel threatens him, those defects come out. He spots weakness and capitalises on it.

“I still think Pete feels he did nothing wrong, which in itself is terrible. He is wired this way, these are his thoughts. He needs serious help.”

Will Joel kill Pete? Or will he find himself in grave danger as he comes face to face with the villain?

Think Joel could kill Pete? Leave us a comment on our Facebook page @EntertainmentDailyFix and let us know what you think of this story.

Hollyoaks airs week nights at 6,30pm on C4 with a First Look episode on E4 at 7pm