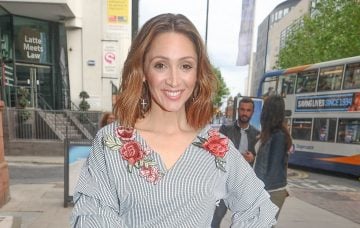 This comes after her split from Coronation Street star Alan Halsall

She’s moved on with her panto co-star Lewis Devine and has confirmed the romance by posting loved-up pics on social media celebrating Lewis’ birthday.

She posted a pictures of them looking very happy on Instagram, with the caption: “How are you mine? 💗💙 I am beyond lucky to have found you baby @lewisdevine! Happy Birthday 🎁.

She’s been sharing lots of pics of Lewis on Inst over the past week, with both of them looking extremely happy.

Lucy-Jo is starred alongside her new squeeze in Snow White and the Seven Dwarfs last year.

A pal told The Sun On Sunday: “Lucy-Jo and Lewis shared an instant ­chemistry, but obviously she was married and didn’t act on it.

“After trying for months, she and Alan called time on their marriage and something slowly developed with Lewis.

They went public to their friends with their romance a few weeks ago and attended a ­wedding of one of Lewis’s relations together, but the news has been hard for Alan to take.”

She and Alan – who plays Tyrone Hobbs in Corrie – divorced earlier this year, ending their nine year marriage.

The former couple have one daughter together, Sienna-Rae. They confirmed their divorce back in May.

Lucy-Jo issued a statement at the time which said: “I can confirm that Al and I are divorcing.

“We remain friends and devoted mummy and daddy to our daughter Sienna.

“It’s very amicable but they’ve decided to go their separate ways,” a source told The Sun.

“They’re devastated the marriage is over but have vowed to stay friends. They still really care for each other.”

Lucy-Jo debuted as Donna-Marie in Hollyoaks earlier this year. Her character is a prostitute who is the mother of James Nightingale’s secret son, Romeo.

Pleased to see that Lucy-Jo has found love again? Leave us a comment on our Facebook page @EntertainmentDailyFix and let us know what you think!

Hollyoaks airs week nights at 6.30pm on C4 with a First Look episode on E4 at 7pm