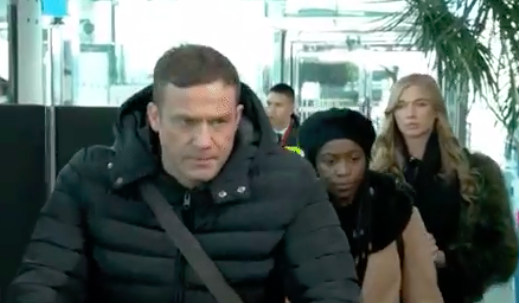 Warren Fox is back in Hollyoaks, and fans of the soap couldn’t be happier about it!

On Wednesday night (January 8), Jamie Lomas reprised his role as supervillain Warren – who is about to turn his ex-Sienna Blake’s life upside down.

The “psycho” was last seen on screen last summer, when his nanny halted Sienna’s plans to run away with their twins Sophie and Sebastian.

In E4’s first-look episode, Warren was seen arriving in the country with the kidnapped siblings. But why is he back?

As Darren Osborne said goodbye to his dad Jack after his recent ordeal with serial killer Breda, another killer was arriving in the country.

Darren assured his dad: “Don’t worry, the village has had its fill of dangerous psychos.”

But he spoke too soon, as Warren was seen disembarking from another ship pushing a double buggy.

He told his children: “Come on kids, it’s time to put our family back together again.”

And viewers were THRILLED!

Yassss Warren is back!!! 😆 #Hollyoaks

& there he is Mr Warren Fox !! Waited so long to see that face 😍#hollyoaks

finallyyyyy warren is back #Hollyoaks

Good to see Warren back great Character and actor 👍

One wrote: “Yaassss Warren is back.”

Another added: “And there he is, Mr Warren Fox!! Waited so long to see that face.”

A third said” Good to see Warren back. Great character and actor.”

“OMG Warren is back with the twins…. #Hollyoaks. Time for psycho Sienna to come out lol… #ItsGonnaBeGood,” added one more, while another typed: “Warren is back in Hollyoaks. I have never ever been this happy.”

Viewers know that Sienna’s world came crashing down in 2017, when Warren kidnapped their daughter Sophie straight after Sienna gave birth, and later abducted their son Sebastian.

Earlier this year, she stumbled across some twins in a hotel and, believing they were hers, tried to get them back.

Brody and Liberty persuaded her they weren’t her kids. But it later turned out she was right as viewers saw au pair Nina return the twins to Warren…

Spoilers tell us that Warren is set to put a dark plan into motion once he arrives back into the village by sending Sienna anonymous messages in the hope of meeting her.

When they DO meet, he tells her that Sebastian is in danger and needs her help.

Hollyoaks producer Bryan Kirkwood has teased that Warren will “evolve in a brilliant way” during his stay in the village.

He said: “What we love about Warren is that he’s one of the most convincing, plausible and compelling villains and anti-heroes we’ve ever had on the show.

“He’s also a great lover and I think that’s what people really like about Warren. He just wants a family and he just wants the love of a good woman. That’s what sets him apart from other ‘bag of money’ villains in Hollyoaks and other shows.

“There’s a very good reason that Warren comes back to the village. It’s all about family and it’s all about heart.”

Are you looking forward to seeing more of Jamie Lomas as Warren Fox? Leave us a comment on our Facebook page @EntertainmentDailyFix and let us know what you think!