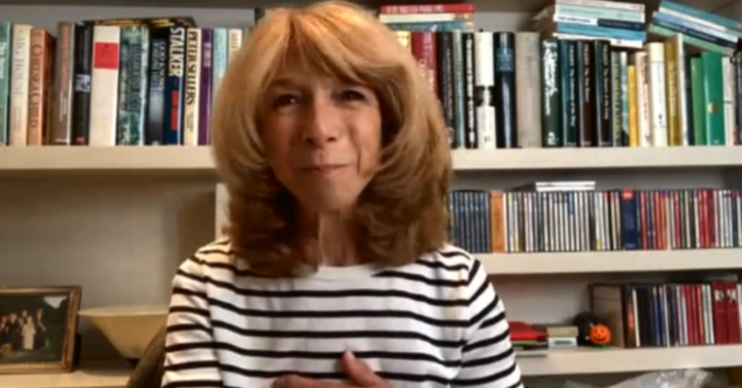 No sixth wedding for Gail!

Coronation Street star Helen Worth has ruled out a new romance for her character Gail Rodwell.

Helen has played Gail on the cobbles for 46 years and the unlucky-in-love Street stalwart has been married five times.

Of those marriages, four have ended in the death of her husband!

Speaking on Wednesday’s This Morning to Holly Willoughby and Phillip Schofield, Helen was asked whether there was any new love on the horizon for Gail.

Phil then pointed out that four of her previous husbands have died.

Helen laughed: “Four of them have died? Have they? I’m not sure. I forget!”

She then said: “So would that be six? It’s quite a lot, isn’t it? How many did Elizabeth Taylor have?”

As Phillip and Holly said it was around about six, Helen looked unsure and shrugged her shoulders.

Phil pressed that she “needs a bit of love”, and Helen empathically insisted she does have love in her life without a man!

“She has love from her children, they might not show it, but they do love her, and her mum loves her too!”

Who has Gail been married to in Coronation Street?

She has love from her children, they might not show it, but they do love her.

Gail married first husband Brian Tilsley in 1979 and again in 1988. They had two children together: Nick Tilsley, and Sarah Platt.

She then married Martin Platt in 1991 – her only surviving husband.

Gail’s next wedding came to Richard Hillman in 2002. The mild-mannered businessman actually turned out to be a serial killer.

He met a watery end when he tried to drown Gail and her kids in a warped suicide pact.

Joe McIntyre was next, who ended up in so much debt that he decided to fake his own death in 2010.

Unfortunately, in his attempts to fake his death, he ended up drowning for real. Gail was banged up for his murder, but was released when a jury found her not guilty.

Her last husband was Michael Rodwell, who Gail married in 2015.

Michael died of a heart attack, although he and Gail were estranged at the time.

Gail back at Coronation Street

With Coronation Street currently on a break from filming due to the coronavirus pandemic, it’s been reported that bosses are doing all they can to get back to work in mid-June.

Helen confirmed to Holly and Phil: “We are going back in a few weeks, it’s all been organised by ITV, everything will be safe for us to go back and we will start filming again.

“We could even get back up to six episodes a week, I think.”

She added: “Iain [MacLeod, Corrie’s producer] said they’ll be some reference to COVID-19, but I’m not sure how much, it would all be speculation on my part.

“But I do know they’ve been working on it since lockdown started. The writers are brilliant at coming up with ideas when they need to and I don’t think this time will be any different.”