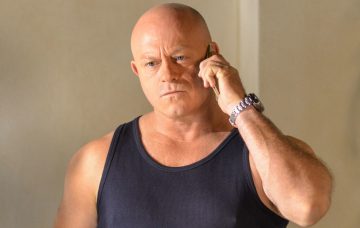 Grant Mitchell to be revealed as Keanu and Sharon’s blackmailer in EastEnders?

Is he protecting his bro?

The identity of Keanu and Sharon’s blackmailer has had EastEnders fans making wild accusations all week – with Louise Mitchell, Mel Owen and Hunter Owen all suspects.

Even Sharon and Keanu have brainstormed all of the possible culprits, and the list of Shazza’s potential enemies was (ahem) quite long.

But one person Sharon didn’t think to suspect was her ex-husband and current husband’s brother Grant Mitchell.

Someone knows about Sharon and Keanu’s illicit affair and they are ready to spill the beans to Phil.

And the blackmailer could be revealed as fan favourite character Grant…

Keanu is desperately trying to get to the bottom of who is the secret blackmailer, but there are a few facts he doesn’t yet know…

For example, Grant’s undying love for his ex-wife Sharon. And it wouldn’t be the first time he’s exposed one of her affairs!

(And Keanu thought he only had to worry about one Mitchell brother getting their hands on him!)

Long-time viewers will remember the epic 1994 storyline dubbed Sharongate, when Sharon cheated on husband Grant with his own brother Phil.

Back then, Grant got his hands on a tape of Sharon revealing how she felt about the two brothers to friend Michelle Fowler.

The episode when Grant discovered the affair remains one of EastEnders’ highest viewed episodes ever.

Meanwhile, Ross Kemp has never ruled out a possible return.

Earlier this year, he said of his EastEnders role: “It’s a great job to have and I often think it would be lovely to be back in a soap.”

He was last seen in Walford in 2016, when he met his son Mark Fowler Junior, but Mark decided not to tell him the truth about who he was…

Would you like to see Grant Mitchell back in Walford? Leave us a comment on our Facebook page @EntertainmentDailyFix and let us know what you think!