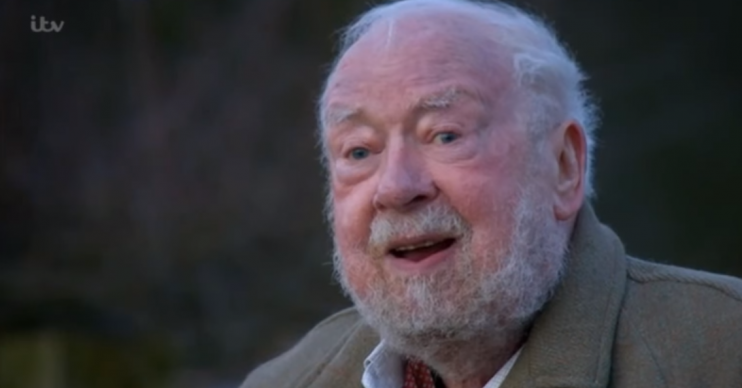 He was a popular character and actor

Laurel Thomas heard the sad news that her beloved father-in-law Sandy had died – and tears flowed on and off screen.

Viewers will remember Sandy was Laurel’s late husband’s dad, who was involved in a heartbreaking elderly abuse storyline in 2012.

A wonderful gentleman and greatly missed.

Sandy was the father of vicar Ashley, who died of vascular dementia.

We last saw Sandy sending a video message from Australia where he was living out his last days.

Read more: Emmerdale SPOILERS: Liam and Leyla plan to be together

Actor Freddie’s death, at the age of 91, was announced last summer by agent Lesley Duff.

She said: “It is with great sadness that I can confirm the death of Freddie Jones.

“Freddie was a much loved and admired actor, known for his triumphs in classical theatre, film and television. He will be greatly missed by all who had the pleasure of knowing him and most especially his family.”

On screen, Laurel was seen getting news of Sandy’s death via a phone call.

Those watching from home, including cast who had starred alongside actor Freddie, shared their memories of the late star.

Kelli Hollis, who played Ali Spencer, added: “Freddie, one of the most amazing gentleman I’ve ever met. Legend.”

Freddie one of the most amazing gentleman I've ever met. Legend xx

He really was one of the best, miss him very much

Freddie Jones a great character actor, he made his subjects so real.

A fan added: “An absolute legend, end of!”

Another said: “He really was one of the best, miss him very much.”

“Freddie Jones was a great character actor, he made his subjects so real,” said one more, while another added: “A wonderful character, a true gent.”

Many others sent heart and crying emojis.

At the time of Freddie’s death, actor Nick Miles – aka Jimmy King – said: “One of the loveliest men I’ve ever shared a scene or a dressing room with.

“It was a great privilege to work with an actor of his stature. He also gave the most moving speech as he departed Emmerdale, all about love. Sorely missed.”

Freddie’s son Toby followed his dad into acting, and is famous for his performances in The Hunger Games, Jurassic World: Fallen Kingdom and Doctor Who.

What is your lasting memory of the actor Freddie Jones? Leave us a comment on our Facebook page @EntertainmentDailyFix and let us know what you think!