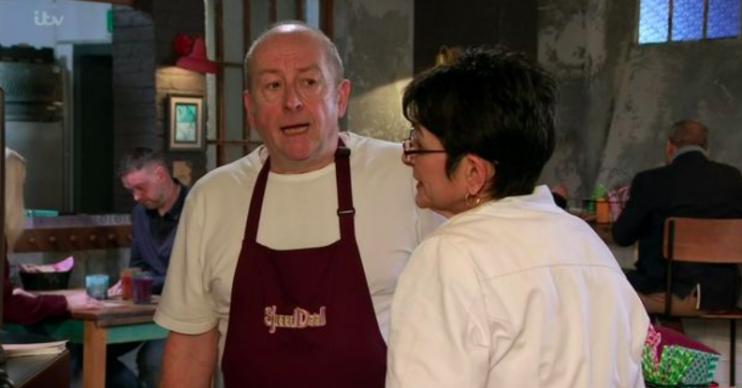 When will it end?

On Wednesday night (February 26), his demands left his poor wife Yasmeen injured and struggling to cope at work.

While Geoff had no sympathy for Yasmeen whatsoever, those watching from home were devastated for her.

Yasmeen could be seen clearly in pain from a back injury after her husband had forced her to move the sofa to vacuum underneath.

We know where you can stick that hoover Geoff!

Trying to cover his tracks when Yasmeen’s granddaughter expressed concern, Geoff lied: “Don’t blame me. I told you not to move it on your own.”

My heart breaks for Yasmeen so much, she deserves better than Geoff.

Of course, viewers know that Geoff has been trying to keep his wife at home as much as possible, and guilting her into cleaning the house until it’s spotless – making her feel bad if he finds a speck of dust.

Clearly uncomfortable that Yasmeen had been lured back to work by Alya, the vile bully took his bad mood out on them both by scolding them for chatting when they should be working…

His fury continued when he was forced to give two customers their money back for poor service.

He eventually got his way when he sent his wife home.

But viewers were disgusted by his behaviour, with one tweeting: “This Yasmeen and Geoff storyline is triggering me so bad #Corrie.”

Another said: “Geoff up to his old tricks, horrible old git #Corrie.”

Geoff up to his old tricks, horrible old git #Corrie

This Yasmeen and Geoff storyline is triggering me so bad #Corrie

A third typed: “For the love of god please end this Geoff and Yasmeen storyline, it’s just absolutely awful #Corrie.”

“Geoff’s a misery and is never happy unless he’s bullying people,” seethed one more, and another added: “My heart breaks for Yasmeen so much, she deserves better than Geoff and deserves so much happiness.”

This week, ED! told you that Corrie viewers had been reporting the soap to Ofcom over the distressing coercive control scenes.

The controversial storyline has made the former hospital radio DJ one of the most hated men in soaps, and those watching from home have clearly had issues with some of his more heinous crimes.

Some have even objected to the scenes being shown before the watershed.

Fans of the soap have even admitted to switching over after Geoff forced Yasmeen to eat crab shell from the bin and convinced her she was an alcoholic.

Ever since the ITV soap confirmed a coercive control storyline for the pair, Geoff’s behaviour has become more and more disgusting.

Upcoming episodes will see his abuse take another disturbing turn when he rails at her for not cooking him meat for dinner and reports have suggested he will kill her beloved pet chicken, Charlotte.

Will Alya be the one to expose him?

Do you find this storyline triggering? Leave us a comment on our Facebook page @EntertainmentDailyFix and let us know what you think!